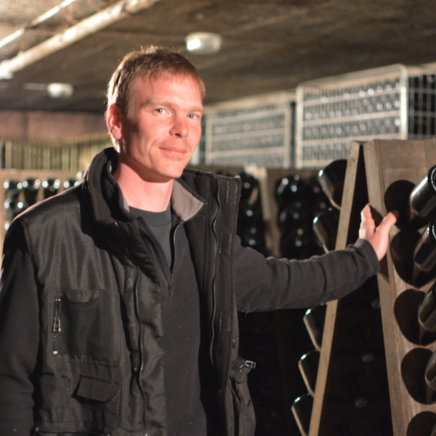 The terroir of Verzenay, classified as a Grand Cru, is a rather cold terroir producing very large Pinot Noir. But the white whites of the Montagne de Reims surprise by their power and their ability to...

The terroir of Verzenay, classified as a Grand Cru, is a rather cold terroir producing very large Pinot Noir. But the white whites of the Montagne de Reims surprise by their power and character. The village of Verzenay is a charming commune steeped in history: since Gallo-Roman times its terroirs have been recognised and the vines are cultivated there. In the 9th century it was called Virdunacus from the Latin Viridium Sanum meaning "green place". In 1873, an unofficial classification placed the village among the 3 best Champagne vintages. Thanks to our new vat house completed at the end of 2015, we will be able to vinify each plot individually in the coming years. Champagne does not have the reputation of having "living" soils. However, for several years now, a groundswell carried by the new generation has begun a formidable task. We are totally in line with this desire to revive the soils of Champagne and to leave healthy soils to future generations.

The estate's origins date back to the 19th century with the construction of its magnificent vaulted cellars in 1820 and the production of the estate's first bottle of Champagne by Alfred Ravez in 1863. A Ravez girl married a Quenardel just before the Second World War. The Quenardel Family entrusted us with the reins of their precious estate in 2014 so that we could continue the historical family traditions. Our wine history having started in 1850 with the Moulin-à-Vent Appellation, we are fully aware of the responsibility but also of the privilege of managing a wine estate. We bring to Champagne Quenardel a "Burgundian" vision, i.e. before making Champagne we produce beautiful Pinot Noir and Chardonnay and then beautiful wines. Vinosity and food and wine pairings are essential elements in our vision of Champagne. We defend the Champagne of terroirs and gastronomy.

Successive generations of Labruyère have always been very attached to the traditional values of family and work. We are very attached to the control of the entire wine value chain, the ownership of our vines and environmentally friendly agriculture. The Champagne that most closely resembles the Labruyère Family would be an old vintage Champagne: very fine bubbles, vinosity, aromatic complexity, fruit of time and patience, unity of a single vintage...

We are committed to a prolonged ageing of our Champagne in the cellar, to the creation of complex and ripe basic wines. Finally, we are looking to create Champagne from local areas and gastronomy.