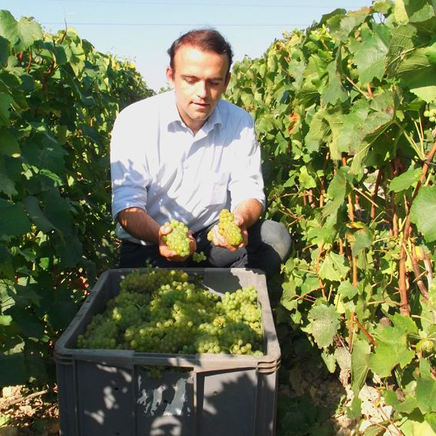 Welcome to Champagne ! More precisely in the valley of the Marne where Olivier and Laetitia ...

A century after its creation, G.F. Duntze champagne is back in the spotlight. And it is Victor Duntze, great-grandson of the brand's founder, oenologist and former wine broker...

A hundred years ago, Duntze champagne already panicked the taste buds. On the strength of this heritage, Victor Duntze offers the "Les Légendes" collection, composed of a rosé and four raw vintages, each originating from a single Champagne terroir. The elaboration of its vintages is therefore based on a strict selection of its supplies. These vintages aim to convey sensations of delicacy, power and precision. In addition, each cuvée has its own liqueur, the result of a real "research & development" approach, making it possible to magnify the terroir and establish the "Duntze taste". "It is the house secret and for me it is an oenological act as important as the blending". V. D.

Born in Bremen (Germany) in 1856, in a family of brewers, Frédéric Thomas Duntze was one of those Germans who came to Champagne in the 19th century to try their luck, attracted by the prospects of success offered by the development of champagne. He became chairman of the board of directors of a large company. His son, Georges Frédéric, born in Reims in 1888, was the founder of Duntze champagne in 1913. The brand remained in existence until 1939, when the economic situation and poor health of G.F. Duntze necessitated the closure of the business. Then Robert (son of Georges Frédéric) and Vincent (son of Robert) became well-known brokers. Then comes Victor (Vincent's son) who fell into the magic potion of the very small champagne. On the father's side, we know why. On the maternal side, too, her mother is a Montaudon damsel. Victor undertook a training course focused on champagne. In 2003, at the request of his grandfather Montaudon, he took over the management of the family vineyard, i. e. about fifty hectares, before becoming director of SA Champagne Montaudon, which was then producing some three million bottles. In December 2008, the Montaudon brand was sold to LVMH and in 2009, Victor became a broker. He is passionate about this profession and rediscovers a taste for champagne. He knows many winegrowers and is able to make the drastic selection to give birth to his or her own champagnes. A century after its creation, the brand is back on the scene under the name of G.F. Duntze (G.F. for Georges Frédéric), in homage to his great-grandfather.

Thanks to my competence as an oenologist and my experience as a former Champagne wine broker, I produce my wines in a "separate terroirs" way to reveal all their characteristics and the diversity of our vineyard, which is my particularity and allows me to create champagnes with a transcendent natural generosity. Freshness, precision, subtlety, the tasting of the Les Légendes collection is a sensory experience "hand-stitched" for an authentic pleasure.