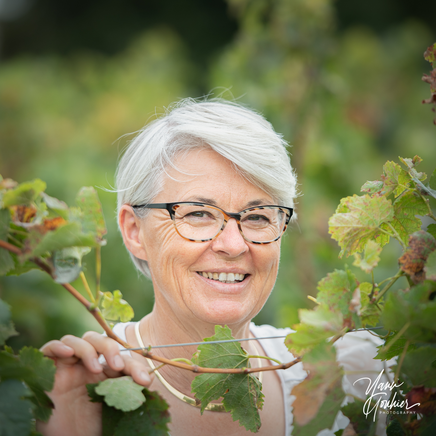 In 1992, the Chevrier family, the fourth generation of winemakers, fell in love with this old Gironde property. After considerable efforts to rehabilitate the vineyard, they produced a racy, supple, silky wine and became the reference in the Blaye Côtes de Bordeaux appellation with Bel-Air La Royère.
Corinne Chevrier, always in search of originality and perfection, highlights the Malbec grape variety by creating amazing Merlot-Malbec blends. Malbec (or Côt), an ancient grape variety of the Bordeaux region, has recently regained its letters of nobility thanks to passionate winemakers such as Corinne. Widely used in the Château's wines since 1995, it enriches the vintages with spicy notes and deep nuances. Corinne Chevrier likes to remind us that although it is "the illegitimate child of the Bordeaux vineyards", it has its place in the Château Bel-Air La Royère family. Perfectly adapted to the terroir, the Merlot-Malbec blend reveals itself on notes of great finesse. The 14 hectare estate is located in the Gironde in the commune of Cars on clay-limestone soil. In 2016, Château Bel-Air La Royère signed the charter of Organic Agriculture after several years in reasoned culture. From the 2019 vintage onwards, the AB label will appear on the back labels. Since 1995, we are pleased to be regularly quoted by the Figaro, Decanter, the Revue des Vins de France, Robert Parker, Bettanne and Dessauve... But also the Gouttes de Dieu n°21 ! Corinne has surrounded herself with a team mainly composed of women. They work today to bring you the best of the Château Bel-Air La Royère vineyards.