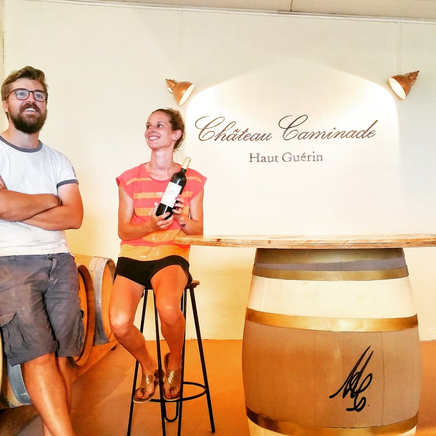 Château Caminade Haut Guérin has been a family business since the early 1930s. Originally, both families, Thibaut and Caminade, managed the vineyard. The grandfathers of the...

Château Caminade Haut Guérin has been a family business since the early 1930s. Originally, both families, Thibaut and Caminade, managed the vineyard. Pierre's grandparents replanted all the vines after buying the winery at auction. They then enlarged the domain by buying parcels in the surroundings.

Château Caminade Haut Guérin has been a family business since the early 1930s. Originally, both families, Thibaut and Caminade, were at the head of the estate. The first family owned the vines at Cardonnet, which were located on a plateau on the heights of Génissac, where the soil was clay and gravel. Christiane's grandfather and father - Pierre's grandmother - replanted everything after buying the winery and the vines at auction. They then expanded the estate by buying up plots of land in the surrounding area. Thus the estate is now a well-structured operation.

From now on, it is as a family that we manage the estate, which has long been divided between two families. Pierre, grandson, and his partner Léa are in charge of the continuity of the vineyard. Not without the support of the rest of the family and especially Marc, the Grandfather!

Being a winegrower is not in itself a profession, it is a passion that becomes the guiding principle of our lives. We live for our grapes and our wine. It is our pride, our work! This is what the profession of winegrower represents in the heart of the between two seas in Bordeaux!