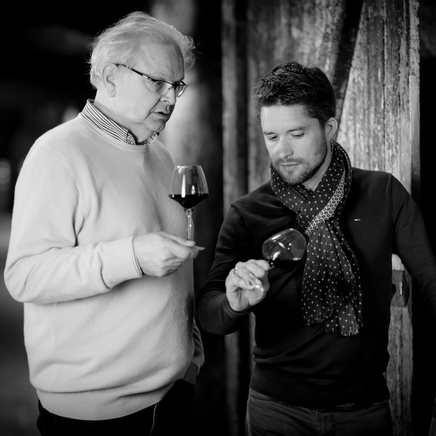 Château de Parnay is located next to the Loire River on a UNESCO World Heritage Site. Created in 2006 by Mathias and Régis, the château has been truly restored and the vineyard is now...

Château de Parnay is located next to the Loire River on a UNESCO World Heritage Site. Created in 2006 by Mathias and Régis, the château has undergone a real restoration and the vineyard is now managed organically in order to preserve the most famous clay-limestone terroirs of the appellation on which it is based.

Château de Parnay is a jewel of the AOC Saumur Champigny and the estate is close to more than two hectares of troglodytic cellars in which is located the historic cellar of the former owner Antoine Cristal, with old presses and glass vats. Indeed in the 19th century the castle was a Mecca for Saumur wine. The estate was one of its biggest customers, the Russian tsar JP Morgan, and even the English court was fond of the wines of Château de Parnay. It was Edward VII, the King of England, who addressed this lovely compliment to Antoine Cristal: "If the alchemists of the Great Work had known your wines, they would not have gone any further in search of drinking gold".

Mathias Levron & Régis Vincenot have in common a love of nature and local products. It is on the occasion of many fishing trips that their project, which they still think impossible, to take over a vineyard is gradually being built... Soon, the young winegrower and the entrepreneur set out to find a vineyard to develop together...

And it was in 2002 that the adventure really began when the two men first took over Château Princé. Then in 2006 the Château de Parnay with the aim of restoring the nobility of this venerable saumuroise institution. Drawing their strength from the authenticity of their values, they now cultivate 50 hectares of vines with the aim of producing exceptional wines in a way that respects the environment. They have been certified organic since 2013 by Ecovert and are now regularly awarded medals at national and international exhibitions.

"Good grapes for a good wine." That's why Mathias and Régis have chosen organic farming and careful tillage. Artisans at heart, the key words of their work are rigour and mastery of know-how to sublimate the personality of the terroir.