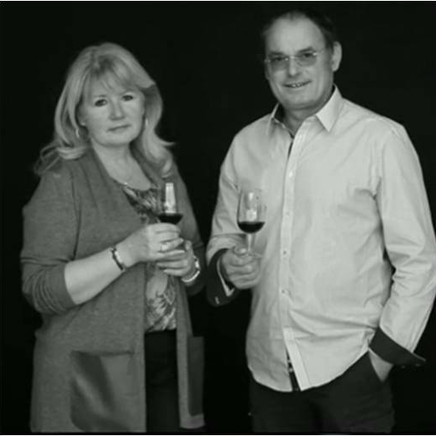 The vines of Château Léognan are in the heart of a bucolic property, protected from the Atlantic Ocean by the pine forest of the Landes. Located on the edge of the Pessac-Léognan appellation, the vineyard is characterised by its gravelly soil, which releases the heat stored during the day and thus helps the Cabernet Sauvignon to reach optimal maturity. Competitive due to the number of vines per hectare (10,000), the vines draw their nutrients in depth and concentrate them in the grains which are carefully sorted several times during the hand-picking, in order to guarantee a very fine quality of wine.

All vintages are awarded gold medals at international competitions, and recognised by the leading professional magazines such as Gault and Millau, the Hubert Guide, Le Point, the Revue des Vins de France, Decanter, Sommelier International...


Philippe and Chantal Miecaze bought Château Léognan on a crush in 2007. Formerly in medical imaging in the Paris region and passionate about wine for about thirty years, they sell their company to make their dream come true: to produce their own wine. Four years of work will be necessary to restore the Château to the splendour that once charmed François Mauriac, whose 19th century writings are partly set in the estate. The Château now houses four guest rooms.

The 6 hectares of vines, carefully planted and maintained by the neighbouring Grand Cru Classé de Pessac-Léognan Domaine de Chevalier, are recovered by the couple when they bought the château. From this beautiful heritage and a work guided by the requirement and passion are born the wines of Château de Léognan.


We came to wine out of passion. Today I work in winemaking, my wife takes care of the guest rooms, we constantly have new projects like the restaurant we opened in the old stables of the estate a little over a year ago. The history of Château Léognan is the story of a renaissance, symbolized by our label. This one uses the symbol found on the tile of our chapel: two phoenixes who drink the blood of Christ on the chalice and become immortal.

After having perfectly restored the Château dating from the 17th - 19th centuries, Philippe and Chantal are today dedicated to the recognition of their wine, Château Léognan, as one of the best wines of Pessac-Léognan, worthy of the finesse of its neighbouring Crus Classés.