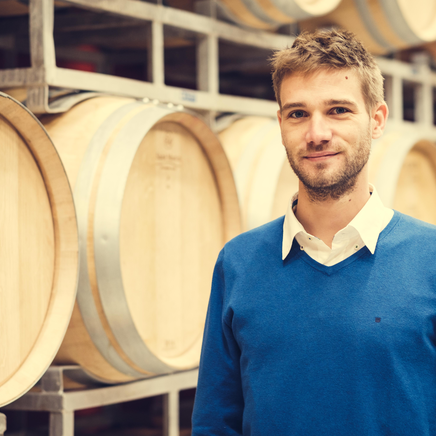 “A question of sharing”

The average age of the vineyard is 40 years old and covers an area of 28 hectares well exposed to the south with a grape variety composed of 90% Semillion and 10% Sauvignon on a clayey-limestone soil. The...

The average age of the vineyard is 40 years old and covers an area of 28 hectares well exposed to the south with a grape variety composed of 90% Semillion and 10% Sauvignon on a clayey-limestone soil. The particular climate of our region with its morning mists and sunny afternoons in autumn allow the development of "Botrytis Cinerea". The whole produces a wine that under a beautiful golden color is fine, smooth and very fruity. The grapes are picked by hand, in the traditional way, by successive selections as soon as Botrytis Cinerea appears. The whole is then carefully vinified by Daniel Sanfourche in a culture that combines traditional techniques and modern processes.

It was in 1919 that Mr. Ducau's grandfather, who had already owned Château Pontac in Loupiac since 1873, bought Château De Loupiac, renamed Château Loupiac-Gaudiet. Gaudiet being the name of the vineyard plot behind the Château. Marc Ducau took over in 1964, followed by Daniel and Marie Laurence Sanfourche in 1986. In 2014, it is my turn to join my parents to make the family business last.

Integrating the family property as a matter of course, motivated by the desire to ensure that the know-how of 5 generations will continue while democratizing a wine that has everything to please. For decades, we have always wanted, as an obstinacy, to offer you a wine with a very good quality/price ratio and easy to drink. Considering that a great wine is not always synonymous with a "great price"... "the best wine is not necessarily the most expensive but the one we share" Georges Brassens

What is particularly close to my heart today is to shake up preconceived ideas and show how much a sweet wine can be appreciated and easy to drink on many occasions. It is true that sweet wine goes perfectly with foie gras but dare it with a strong cheese, a spicy dish or a fruit salad and I am sure you will be conquered! I am trying to surprise you, nothing is more encouraging than your smile at the tasting!