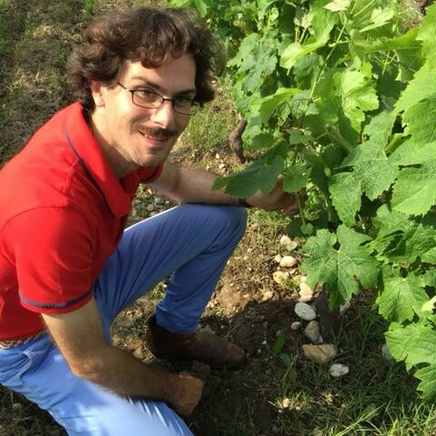 (8 ratings)
“And if music was beneficial to the vine!”

50 km south of Bordeaux, on a 7-metre high hillside of Güntziennes gravel, mixed with clay and resting on a limestone slab overlooking the Garonne. Poor, naturally drained soil, ideal for...

50 km south of Bordeaux, on a 7-metre high hillside of Güntziennes gravel, mixed with clay and resting on a limestone slab overlooking the Garonne. A poor naturally drained soil, ideal for the development of Cabernet-Sauvignons, Cabernet-Francs, Merlot, Petit-Verdots (red grape varieties) as well as Sauvignons and Sémillons (white grape varieties), where the vines are planted north-south for maximum sunlight for the grapes.

Music in the vines to ward off the disease. In the middle of the vines, we have installed a box with four loudspeakers to fight against esca, one of the oldest vine diseases that ravages wood and leaves. The results were visible from the first year: 90% less mortality. Our grape varieties are divided into: - Whites: 50% Sauvignon, 50% Semillon. Sauvignon gives the aromas of youth, the wine is more floral, with notes of boxwood and citrus fruits. The Semillon takes over by providing structure and volume, fat and roundness with aromas of honey and apricot. - Red: 18% Cabernet Franc, 46% Cabernet Sauvignon, 36% Merlot. Cabernet Sauvignon structures the wine and gives it mentholated notes mixed with aromas of black fruits (blackberry, blackcurrant). Merlot, round and supple with notes of red fruit, gives the wine its velvety and silky texture. In the blend, these two great Bordeaux grape varieties dominate. Cabernet Franc is difficult to bring to maturity but brings volume and an intense aroma of violet.

It was at the gates of Bordeaux, in the Graves, that the Romans planted the first vines. In the Middle Ages, Graves was the first wine to be exported (especially to England). The Magence estate, surrounded by its vineyards, was included in the first detailed maps of Aquitaine commissioned by King Louis XIV from his cartographer, M. de Belleyme.

The Graves registered designation of origin is the only one whose name comes from the nature of its subsoil, which consists of pebbles rolled by the Garonne in the Quaternary during the melting of the glaciers. These pebbles mixed with the sand left by the Atlantic Ocean when it retreated within its current limits in the Tertiary Age and rest on a clayey bottom. Magence overlooks the Garonne. Thus, the vine grows in poor soil, naturally drained but always finds the water it needs deep down. The pebbles, a wide variety of jasper, which appear on the ground in mass reflect the heat of the sun helping the grapes to ripen. Les Graves is also the only terroir in Bordeaux that can produce sweet white wine, dry white wine and red wine, all of which are recognised as worthy of the'Graves' appellation d'origine contrôlée. The wines of Magence are a recognized example of this.