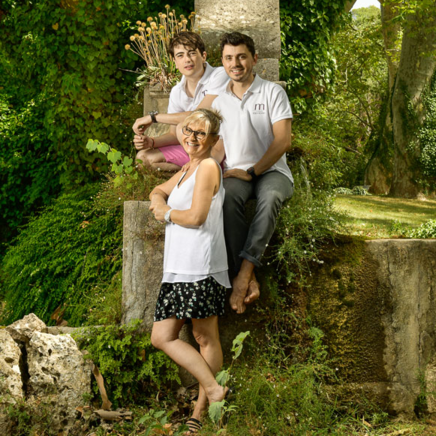 In Saint-Antonin-du-Var, on the borders of the Dracénie, Château Mentone is one of the oldest vineyards in the Côtes de Provence appellation. The estate extends over 170 hectares, both on the....

In Saint-Antonin-du-Var, on the borders of the Dracénie, Château Mentone is one of the oldest vineyards in the Côtes de Provence appellation. The estate covers 170 hectares, both in the communes of Saint-Antonin-du-Var and Entrecasteaux, including 32 hectares of vines. The varied grape varieties (7 different grape varieties out of the 11 of the appellation) make it possible to produce Côtes de Provence in three colours: pink, white and red. The entire Château Mentone vineyard is cultivated and vinified according to the organic standards required for AB certification, which are issued by the ECOCERT organisation.

The origin of Château Mentone's plantations dates back to the 1840s. They were made by the Perrot de Gasquet family. At the end of 2003, Marie-Pierre Caille took over the reins of Château Mentone, one of the oldest wineries in the Côtes de Provence appellation. Immediately, it rehabilitated the vines, modernized the wine production tool and thus put the estate on the path to excellence, while striving to preserve as many historical parcels as possible. Today, the Mentone vineyard is on average 30 years old while some parcels of Carignan are over 80 years old, those of Clairette over 50 years old. Concerned about restoring soil quality and biodiversity after years of conventional viticulture (one of the most pesticide-using crops in France), Marie-Pierre Caille undertook, from 2008 to 2012, the conversion of the Estate into biodynamic agriculture. Today, production is naturally limited to an average yield of 35hl/ha, thus promoting complete grape maturity and a perfect expression of this healthy, natural and historical terroir.

In 2008, the Château Mentone estate embarked on an organic and biodynamic conversion of its crops, allowing almost no chemical inputs. The same principles adopted for winemaking: fermentations are carried out with the natural yeasts present on the grapes, without exogenous yeast; winemaking additives are also prohibited and doses of S02 (sulphur dioxide) are reduced to a minimum. A strong commitment, at all times, which led to the operation obtaining AB certification on May 22, 2012.