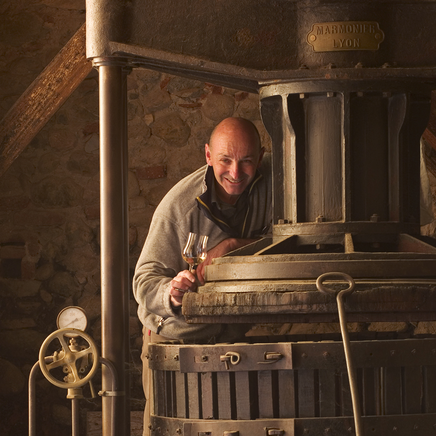 In the heart of the Roussillon plain, between the sea and the mountains, the Nadal-Hainaut castle was built in 1826 on the Priory of Santa Maria de l'Eule: a Cistercian monastery dating from the 12th century. The screed...

In the heart of the Roussillon plain, between the sea and the mountains, the Nadal-Hainaut castle was built in 1826 on the Santa Maria de l'Eule Priory: a Cistercian monastery dating from the 12th century. The chapel of rolled pebbles bears witness today to this period when monks were already cultivating vines.

On the estate, 53 hectares are dedicated to the vine, 10 grape varieties are grown exclusively in organic farming: Macabeu, carignan, chardonnay, muscat petit grain, muscat d'alexandrie, grenache noir, grenache gris, syrah, cabernet sauvignon and merlot. The vinification cellar, renovated in 2017, was equipped with the latest generation of stainless steel vats, allowing us to make wines with better temperature management. Jean-Marie Nadal and his 3 daughters produce today varietal wines, Côtes du Roussillon in white, red, rosé as well as natural sweet wines, highlighting each grape variety and its terroir. Products representing the finesse and elegance brought by grapes naturally ripened by a singular climate, a combination of beautiful sun and wind: the Tramontane. They are now working on new sulphite-free vintages, resulting from micro-vinification in barrels.

Concerned about the environment and with the greatest respect for the vine and biodiversity, Jean-Marie and his team work the land with care. The conversion to organic farming has enabled the estate to become a real sanctuary with the return of insects and birds. The vineyard has been able to renew itself, while listening to the surrounding nature and preserving biodiversity.

The marriage of my grandparents, Thérèse Hainaut and François Nadal in 1900, marked the beginning of the history of Château Nadal-Hainaut. Our Carignan, now a hundred years old, was planted that year to celebrate the union of the young couple. Already two generations of winegrowers preceded them in the Hainaut family.

Then it was the turn of my father, Jean Nadal, to take the reins and continue what his father had founded. His love for the land is what he passed on to me from an early age. I always found myself among the pickers in the vineyards or helping my father in the cellar. So it was at a very young age that my passion for the vine was born. Trained as an oenologist, I took over the estate in 1980, with the great support of my wife Martine. Within a few years, we developed the estate around the wine-growing activity by creating gîtes and reception rooms in the old priory buildings. Today, it is with my three daughters that the story continues. We work together on micro-vinifications in barrels, sulphite-free vintages, etc...


"being a winemaker is... being attentive to the vine, the earth and the wind.
Accompanying the vine shoot that you plant, until its first harvest, then until the following harvests, to grow beautiful grapes. Select them, to extract the best from them, with the greatest respect for the earth and wildlife.
Since our conversion to organic agriculture in 2010, we have observed the return of certain species to the estate. Concerned about preserving our biodiversity, our health and that of the vine, we put all our will to work the

land in the greatest respect for the living. The balance is slowly

beginning to be restored. ».
The job of winegrower is a real vocation: from the vine shoot to the bottle, I have to ensure the quality of the product by listening carefully and humbly to the earth. The grape variety that most resembles me would be our good old hundred-year-old Carignan, which was planted in 1900, when my grandparents Thérèse Hainaut and François Nadal, pioneers of Château Nadal-Hainaut, joined forces. A vine with age-old strength that continues to produce at the foot of our majestic Canigou.
The estate's grape varieties are truly diversified: we cultivate 10 red and white vines, some typical of Roussillon, others less so, but which do wonderfully well on this clayey-stony terroir. The
vines are all located on the estate and benefit from the irrigation created in the 12th century by the Cistercian monks, who at that time were already cultivating vines on the priory.