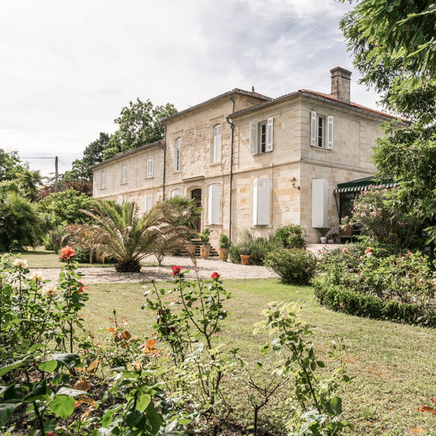 “Wines for keeping in organic conversion”

Château Pontac-Lynch is a family estate located in the Bordeaux vineyards of Margaux-Cantenac. On the edge of the Gironde, the soil is sandy-gravelly with a clay-limestone subsoil. The vine plant...

Château Pontac-Lynch is a family estate located in the Bordeaux vineyards of Margaux-Cantenac. On the edge of the Gironde, the soil is sandy-gravelly with a clay-limestone subsoil. The vineyard's grape varieties are classic for the region: Cabernet Sauvignon and Cabernet Franc, Merlot and Petit Verdot are grown there.

The operators offer for sale three red wines in the Haut-Médoc, Margaux Cru Bourgeois and Margaux appellation d'origine contrôlée. Production is focused solely on red wines. The Quintessence cuvée is made from the most beautiful Cabernet Sauvignon and Cabernet Franc grapes grown in the vineyard. You will have to be patient to taste it, according to the winegrower's advice.

In 1720, the Earl of Lynch had the present house built as a hunting lodge. Later, it became the property of M. de Pontac, admnistrator of the city of Bordeaux, thus giving his name to the property. Since 1952, the estate has belonged to the Bondon family. Today, it is the fourth generation that manages the estate.

Since 2013, the estate has been certified "Exploitation Haute Valeur Environnementale de Niveau 3". This certification rewards work done with respect for the terroir, the environment and traditions. The owners are totally committed to this approach: from counting insects to maintaining the flowers in the vineyard.

Château Pontac-Lynch is a typical Médoc vineyard because of its grape varieties. It is indeed juxtaposed with great names of Margaux, including Grands Crus Classés in 1855, such as Château d'Issan, Château Palmer or Château Rauzan.