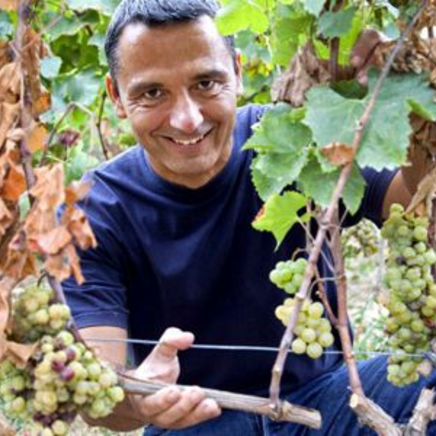 Rioublanc is located on a high clay-siliceous plateau. The intensive agriculture of the 20th century did not express the full potential of the vineyard. Our priority was to understand how it works! This is what led us to lead our estate in organic viticulture. Today, Château Rioublanc relies on a solid team of 10 permanent employees and seasonal workers. Every year, we also welcome interns and students in viticulture and oenology from all over the world!

Château Rioublanc is a beautiful Girondine building from the early 19th century, acquired in 1963 by my father, Edouard Carretero, who began bottling at the Château in 1972. In 1989, I joined the family estate, since then the estate has grown to 47 hectares, certified 100% organic. since 2012. For a winegrower's son, the takeover of the family estate was a matter of course. The good father-son relationship and training as an engineer-oenologist have contributed to the evolution of the estate: restructuring of the high-density vineyard in 1999 and conversion to organic ten years later.

Rioublanc's strength is its palette: red, rosé, dry and soft white, creamy and even grape juice. Each colour reveals a facet of our domain to the amateur. But it is also a teaching for the winegrower who thus enriches his experience.

"Become who you are" would be a good starting point to define our approach to wine. At the beginning, we try to make the best wine according to the criteria expected of our time. With experience, we create the wine that the terroir can give us, and which corresponds above all to our sensitivity. Rioublanc is neither in Médoc, nor in Pomerol... So let's make the wine... of Rioublanc!