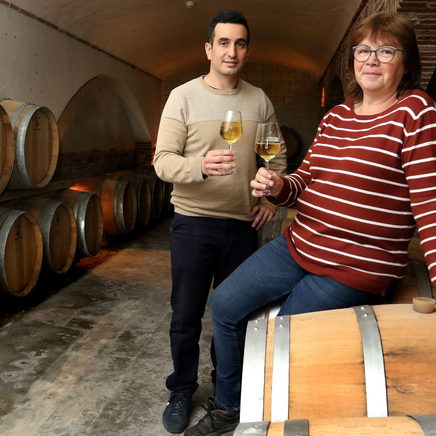 The history of Château Saint Louis began in 1991 when Marie-Cécile and Ali Mahmoudi bought it. Since then, the rebirth of the estate has been achieved through multiple transformations both in the vineyard and in the winery.

The history of Château Saint Louis began in 1991 when Marie-Cécile and Ali Mahmoudi bought it. Since then, the rebirth of the estate has been achieved through multiple transformations both in the vineyard and in the cellar: extension of the production area (from 6ha to 30ha) with new plantings of red grape varieties (Pinot Saint Georges, Cabernet Franc, Gamay, Syrah, Merlot and Cot) and white grape varieties (Chardonnay), renovation of the main buildings by an Italian mason, including the creation of new cellars, and finally the conversion of the entire estate to organic farming in 2005. After obtaining her national diploma in oenology (following 2 years of apprenticeship at Château Saint Louis from 2014 to 2016), Fanny Vayson (daughter of Mr. and Mrs. Mahmoudi) settled on the estate as a Young Farmer on January 9, 2017. Today, the Mahmoudi family is also recognized as a quality artisan producer by the French culinary college while spearheading wine tourism in the region.

Bought in 1991 by Marie-Cécile (née Arbeau) and Ali Mahmoudi, a former doctor in atomic physics who became a professor of oenology in Toulouse. This estate, a pioneer in wine tourism in the region, has undergone major transformations, both in the vineyard and in the cellar: expansion of the vineyard (from 6 to 30 hectares), plantations, renovation of buildings, construction of new cellars, organic certification. Sylvie (Production Manager since the beginning and Ali's right-hand man) and Benoît Mahmoudi (Ali and Marie-Cécile's son) took over the reins of the estate in 2018 following Ali's sudden death in August 2018.

Since the beginning, the thought that guided Ali Mahmoudi was art in all its forms. The wine is a means of expression of the family art that blends with the setting that represents the domain. This ensemble allows each visitor to evolve out of time between Persian culture and local Toulouse while leaving with a memory that will remind him of these moments with each glass. Coming to the domain is to make sure that art visits the 5 senses, beyond a simple wine. The last TV5 report available on our website allows to realize the passion which animates us.