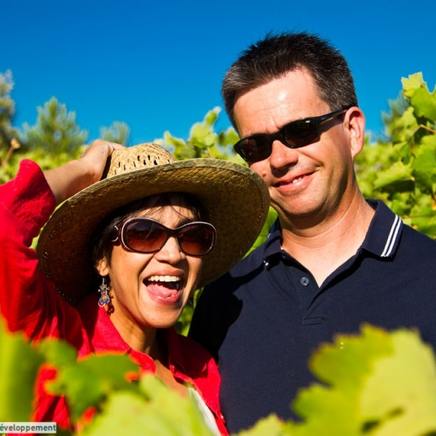 (9 ratings)
“Struck by the vinification virus”

Our estate is located near Montpellier. At Domaine du Clos de l'Amandaie, we work with our family on our 20 hectare vineyard. Located on the slopes of the Causse d'Aume....

Our estate is located near Montpellier. At Domaine du Clos de l'Amandaie, we work with our family on our 20 hectare vineyard. Located on the slopes of the Causse d'Aumelas, the vine produces wines in the Coteaux du Languedoc and Grès de Montpellier appellations.

Stéphanie and Philippe compose on clay-limestone soils and benefit from a particular microclimate that gives their wines particular and complex aromas. The vineyard is influenced by Mediterranean species: the vine is almost grassy and the greenery contrasts with the surrounding mountains.

It is the 6th generation of the Peytavy family that manages the estate today. Le Clos de l'Amandaie, in the commune of Aumelas, was developed successively by each member of the family who added their own personal touch.

In 1968, Yolande and Jacques let Gisèle and Louis take over. The couple chose to have their harvests vinified in the cooperative cellar of the neighbouring village until their son and his wife decided to take over the vinification at the estate.

Philippe, and his wife Stephanie, were raised when Philippe's grandfather was making wine at the estate. There is no choice for him but to take up this step again, which is very important for him. They are revitalising the 20 hectares of vines on the estate and continuing to develop the estate.

Later, the couple decided to work while respecting the biodiversity present in the vineyard: reasoned cultivation, selective budding, lower yields and absence of insecticides.

Since 2010, Stéphanie and Philippe have been vinifying in their new cellar made of Gard stone, whose architecture is in perfect harmony with the terroir thanks to natural materials and its photovoltaic roof.