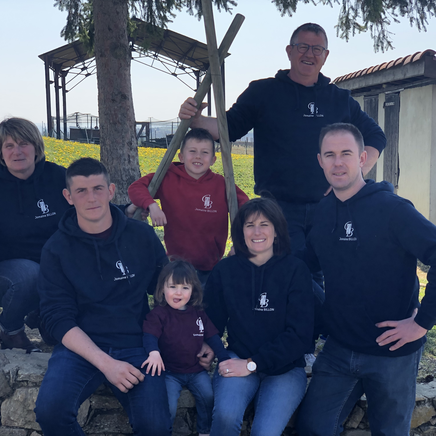 The Domaine is located in Rozier, on the heights of Ampuis, 3 kms from the village centre. 9 hectares of vines in Côte-Rôtie, Condrieu and Vin de Pays des Collines Rhodaniennes.

Starting with the 2000 vintage, we decided to create a cuvée on the hillside of "La Brocarde". Another cuvée of Côte-Rôtie from the estate is called "Les Elotins". The vines of Côte-Rôtie are about thirty years old on average. However, the oldest parcel was planted by my grandfather in 1942.

In 2006, we decided to cross the river and plant a Syrah vine on the left bank of the Rhône in the commune of Vienne, thus creating the "La Bâtie" cuvée, a local wine from the hills of the Rhône, of which we are producing the first bottles for the 2009 vintage.The following year we plant a plot of Condrieu on the hillside of La Caille, and the 2011 vintage will see the arrival of "Les Matisses", the first white wine production of the estate. Finally, in 2015, we produce a new cuvée by plot: "La Côte-Rozier", which we bottle at the end of 2017.