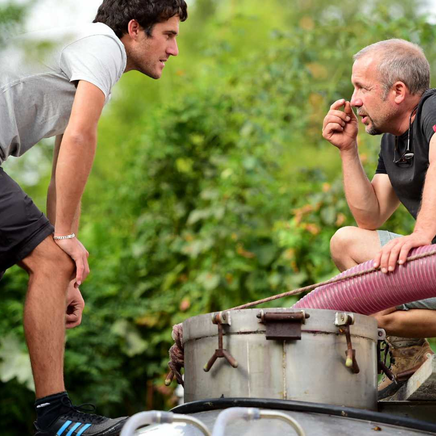 3
0
38
Discover all our winemakers

“An intimate visit to the heart of the vineyard”

Our vineyard is located in Balagne, 8 kilometres from Calvi, Corsica. We cultivate 40 hectares of vines divided into several south-facing parcels. The vineyard is divided into two parts: to the north of the convent in Zilia and to the west of the village of Calenzana in the Upper Figarella Valley.

As Corsican winegrowers, we grow vines that both suffer and benefit from the local climate: rain, sun, strong heat... We are also at altitude since we are located at the foot of Monte Grossu, whose highest point is 1950 metres high.

Between sea and mountains, we mainly work with traditional Corsican grape varieties such as Vermentinu and Biancu Gentile for the whites. For our red wines, we produce old Sciaccarellu, Niellucciu, Grenache and Syrah. We produce about ten vintages, 6 of which are on the Calvi Fiumeseccu and Calvi Pumonte PDOs.

The estate as we know it today was created by Baron Henry-Louis de la Grange. At the time, the Baron was already the owner of the Alzipratu convent, which is still located on the estate today.

Generations follow one another, from Maurice Acquaviva to his son. Together, they develop the infrastructure and cultivation methods on the estate. They also extend the production area to reach the 40 hectares of vines, planted on the hillsides at 250 meters, as we know it today.

The traditional Corsican grape varieties have been planted on the estate since its creation. But the most important thing is the terroir: by respecting it as much as possible, it will give us sweet grapes that will make excellent wines.

At the estate, you can also enjoy the magnificent convent near the tasting cellar. This 16th century building is located in the heart of the Alzipratu vineyard. In the 1970s, it hosted every summer the music festival organized by the former owner Henri-Louis de La Grange.