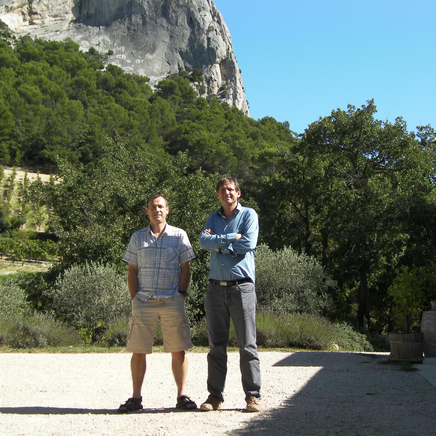 Jean-Charles and Vincent, the two sons of the founder Paul Croset, are today at the head of the estate. A small, artisanal and still family-run business, very interested in all aspects of the ...

Jean-Charles and Vincent, the two sons of the founder Paul Croset, are today at the head of the estate. A small, artisanal and still family-run business, very interested in all the technical and environmental evolutions that the winemaking profession knows. The magnificent terroir of the Dentelles de Montmirail where the estate is located offers wines of remarkable quality. Apart from the beauty of the landscape, the soils and the micro-climate allow the winegrower to have a high quality raw material. Their job is then to sublimate these grapes! This massif is situated between the Rhone Valley and the Ventoux, thanks to the study of the soils, it has been determined that it is the oldest land in the Vaucluse! The vines have gradually settled where before the war the forest took place. A rich region for walks, the walkers will be able to take advantage of the small villages connected by pleasant and practicable paths for the greatest number. Climbing enthusiasts are also welcome as the relief offers beautiful steep cliffs!

For the record, the site of Cassan is said to have been occupied since the Roman period, and maybe even before! The name Cassan comes from Cassano which means "oak" in pre-Celtic. When one sees the beauty of the landscape of Provence, it is not very surprising that already at that time, Men chose to settle there. The Romans had also cultivated vines on these territories. Wine was produced, bottled and then exported to Italy. From that time on, the vine has always been more or less present in the region and it made a strong comeback a few years ago, after the war. In 1974, Paul Croset decided to take over this historic vineyard and bought the Cassan estate, where he built a winery in order to vinify the production. In 2010, the two sons took over the estate, 18 ha in total with 15 ha in the Beaumes de Venise appellation and the rest in the Ventoux. The vines used are between 4 and 40 years old. The grape varieties you will find on the estate are Grenache, Syrah, Mourvèdre and Cinsalut. For the harvest, everything is done by hand. The pigeage is also done by hand! Ageing is done in vats and barrels.

The village is located on an ancient Roman road! The road linked Malaucène to Gigondas. There is a small chapel renovated in the 80's dedicated to the patron saint of travellers, Saint Christopher.