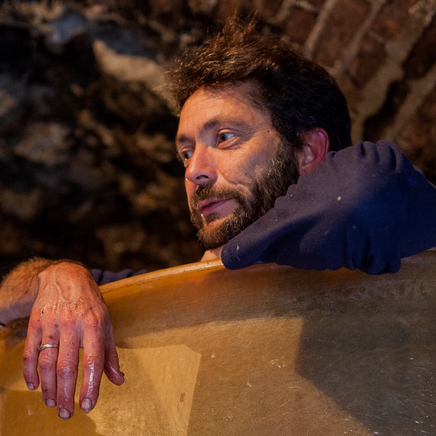 “From Reunion Island to the Loire”

A small 7 ha estate located in the Loir valley, in the Jasnières et Coteaux du Loir appellation, the northernmost of the Loire wines. The vineyard, in organic agriculture since 2010, is a...


A small 7 ha estate located in the Loir valley, in the Jasnières et Coteaux du Loir appellation, the northernmost of the Loire wines. The vineyard, which has been in organic farming since 2010, is mainly composed of flint clay slopes on limestone subsoil, facing south southwest.
The relatively cool climate combined with the particular terroir gives the wines a unique minerality and taste. The soils are worked mechanically to restore their life but in a moderate way to allow a controlled natural grassing to develop and thus allow nature to express itself and balance itself. The
interventions are now based on plants and according to the biodynamic lunar calendar to bring balance and finesse to the wines.


A group of friends, desires for that matter, a good bottle and a good meal, ideas for creating a domain and now the Domaine de la Roche Bleue emerges in 2007 from Reunion Island. Then come the choice of Jasnières and Coteaux du Loir, the great Loire grape variety, Chenin, and the terroir. The discovery of Pineau d'Aunis, a rare grape variety, was the revelation. Sébastien Cornille, the only winegrower in the band, has been working since the end of 2007, with the remote support of his friends, to produce wines "alive, fruits of the vine and the vintage that saw them born, without artifice". The vinification is the least interventionist possible, using indigenous yeasts, troglodyte cellars and barrels mainly for long fermentations and thus allowing the terroir, its finesse and complexity to express themselves.


To be a winegrower is to be at the service of the vine, to observe, analyse and let your intuition do the rest. We live the vine, we accompany it and we try to transmit all our emotions in the wine, the finality... I love living wines, with soul and emotion, where we feel the personality of the winegrower combined with the particularities of the terroir. I hate intensive oenology, smooth and unrelieved wines, where nature and terroir do not express themselves.