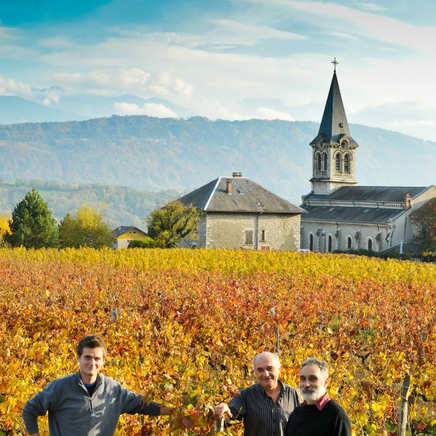 Imagine a "sartot" perched on the heights of the Chignin vineyard in the shade of a cherry tree....

Domaine de la Gerbelle is located in the heart of the Chignin vineyard and the regional natural park...

8
0
7
Discover all our winemakers

It is on the dug valley of the Massif de Bauges, also called "Combe de Savoie" that the Domaine de l'Idylle is located. Here, the vines are cultivated on steep slopes of clay and limestone...

It is on the dug valley of the Massif de Bauges, also called "Combe de Savoie" that the Domaine de l'Idylle is located. Here, the vines are cultivated on steep slopes of clay and limestone. The climate, characterized by cool nights and warmer days on the slopes, gives the wine freshness and fruit maturity. Some plots are very difficult to access, especially for the Mondeuse plot where the vines are located on screes, which means that everything has to be done manually.

The history of the estate dates back to 1840, when Francois Tiollier bought the property, which was composed of vines and fruit trees. In view of the beauty of the place, he named it Domaine de L'Idylle. Albert Tiollier took over the estate and presented the wines in competition for the first time in 1920. It was a victory! Then Henriette and André Tiollier, who represent a turning point in the history of the estate since they are the only ones in the valley to bottle their wines. In 1975, Philippe and then François Tiollier took over the property, which is still a mixed farming estate. They decided to concentrate on wine and reduced the surface area of the estate by half, from 20 to 10 hectares. In 2011, Sylvain Tiollier took over the estate, adding his innovative ideas to wines of great typicity.

For me, being a winemaker is first and foremost a heritage and family traditions. My passion comes from my family, of course. What I like is the possibility of making wine according to one's own image without having to follow production methods and obligations. I have a freedom of artistic expression in the sense that my wines are not made from a recipe, each vintage is different to work with. If I had to talk about an encounter that marked me, it would be in New Zealand, at Margrain Vineyard, where I worked when I was younger. The oenologist I worked with had his own vision of wine. He personified the stages of production, notably by giving names to his vintages as well as to his vats. He was very inspiring for me. My earliest memory of wine is when, as a child, I used to taste the grape juice during the harvest sitting under the press. As a kid, I was very admiring to see the wine flowing out of the press. What I don't like about the wine business is all the fussy regulations that lead us to spend hours behind a desk rather than in the vineyard. It's important because these procedures certify the quality of our wines but it's very complex! On the other hand, what I find most inspiring is the good cohesion in our vineyard where everyone advises and helps each other... It's also the pleasure of producing grapes picked in our plots in the middle of the mountains, because we've worked hard!