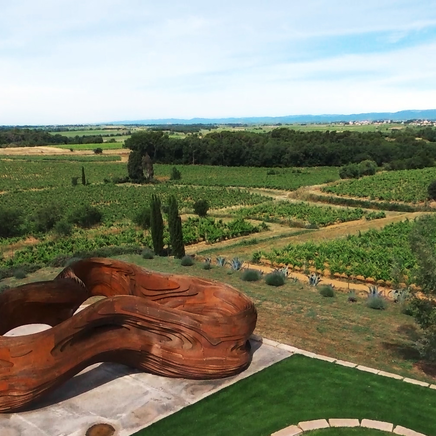 Between Pezenas and Tourbes, in the heart of the Languedoc, our estate is situated between the limestone plateaux of Larzac and the Thau Lagoon, between the rocky land of the Larzac rise and the sandy land ...

Between Pezenas and Tourbes, in the heart of the Languedoc, our estate is situated between the limestone plateaux of Larzac and the Etang de Thau, between the rocky lands of the Larzac rise and the sandy lands on the shores of the Mediterranean. These lands see the passage of the Cévennes episodes which circulate between the mountains with the refreshing air of the still clement Mediterranean in autumn, but also the flow of the Larzac rains in the underground water tables dug for centuries when the sea was present in the Côtes de Thongue appellation, of which the estate is a part.

Our father acquired these vines in 1994 in the heart of the Languedoc at a time when the region was beginning its winemaking transformation towards superior quality vintages. The historical grape varieties of the Languedoc (Aramon for example) disappeared in the 1960s to make way for other varieties such as Merlot or Syrah on small plots around the villages (especially the "circulade" villages found in the Herault). The 90s saw the emergence of small estates of around 10 hectares, grouping together several of these small plots and favouring sustainable agriculture, giving way to local varieties such as Grenache, Carignan and Mourvedre. Here at the Domaine de Sarus, our first vintages are a blend of several of our influences. Between vegetal and mineral. Between the local grape varieties (Syrah in particular) and the sweet grape varieties of the Atlantic coast, always appealing to different gustatory sensations, always on the fruit.

The name of Domaine de SARUS and of our first vintages comes from Asian travels and writings evoking this great bird, the SARUS crane, which in Chinese and Japanese cultures evokes many symbols of longevity. In Japanese culture, this bird (Tsuru in Japanese) symbolizes the "inochi nagai" (a long life) and is often depicted with a turtle (tsurukame) also a symbol of longevity.We want wines that can be tasted without waiting but also that can be kept and discovered several years later, just like our vines which are enriched as the years go by and by an eco-system that respects the flora and its biodiversity: The estate is home to beehives, fields of iris and olive trees that benefit from working the vines as part of a conversion to organic farming.