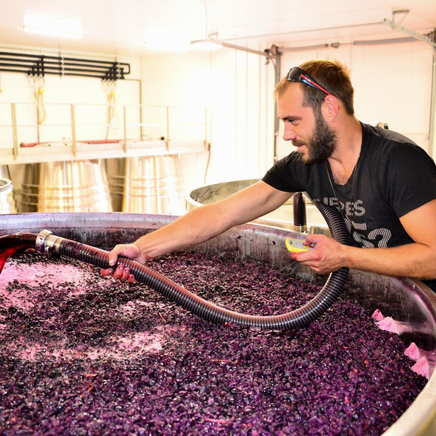 The history of our family has been combined with the history of the vineyard for generations (we go back to 1780) and has evolved over the years to become an estate that is the result of the initiative of...

The COMBAT family has long been involved in wine-growing, Louis COMBAT having in 1933 been part of the group of wine-growers who founded the Cave Coopérative de Tain l'Hermitage in the Drôme.
Since that time, all successive generations of COMBAT have continued to be part of this great house of the Cave de Tain while continuing their other agricultural activities which at the time consisted of the production of cherries, apricots, peaches and pears, as well as cereals.

In the year 2000, production is mainly concentrated on apricots and viticulture.

In 2014, Nicolas Combat, after obtaining his BTS Viti-Oeno and developing his skills abroad (USA, New Zealand, Australia and France), offers his father Pierre Combat, a new evolution of the family business by creating his own winery, the Domaine des Combat.

It will be necessary to wait until 2017 for the project to get off the ground and the first vintage to be vinified.