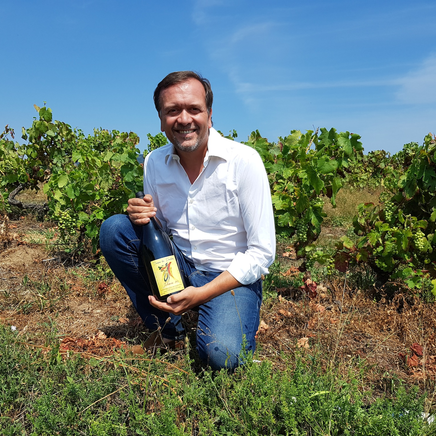 While tasting the wines of Château de Javernand, you will be transported for a stroll in the...

(18 ratings)
“The winegrower with three hats”

When Jeremy THIEN decides in 2012 to nestle in his hills on the borders of Beaujolais and Mâconnais, it is to wear three hats: that of the producer, the winegrower and the community...

It was in 2012, after a professional reconversion, that Jérémy Thien created the Domaine des Frontières. Nestled on hillsides on the borders of Beaujolais and Mâconnais, their old vines produce fine and authentic terroir wines. Jérémy is passionate about wine and is in love with his native Beaujolais region. He realized his dream by becoming a winemaker, which allowed him to practice three professions: producer, winemaker and wine merchant.

When Jeremy THIEN decided in 2012 to nestle in his hillsides on the borders of Beaujolais and Mâconnais, it was to wear three hats: that of producer, winegrower and wine merchant. He has decided to take on these three jobs as a craftsman in order to make what he calls "the turn of his life". Nestled on the hillsides on the borders of the Beaujolais and Mâconnais regions, our old vines produce fine and authentic terroir wines. The grapes are harvested entirely by hand. In our cellar, we vinify and mature our wines like craftsmen. I particularly like two parcels, one in Juliénas at a place called Vayolette. With a northern exposure and a late ripening, it gives a wine of great finesse. The other, in Beaujolais-Villages, the Pré des Bois, which dominates the village of Jullié and has a very particular grain.

The Domaine des Frontières was born at the end of 2012. A wine and Beaujolais terroir enthusiast, who turned an old dream into reality after an atypical professional reconversion. After a career in Paris, Jérémy Thien chose to return to his native Beaujolais to become a winemaker. He went back to school (CRFPPA Davayé), and then started at the end of 2012 on a few hectares of Juliénas and Beaujolais-Villages. First harvest, first bottles, the work pays off and the magic happens, the dream becomes reality.

The very definition of a winegrower is to practice three jobs, each one as exciting as the other: cultivating the vine, making the wine and finally marketing it. Each time it is a new experience, made of human encounters. Wine is not a product like any other. As soon as we drink wine, we have a piece of civilization in our glass. If you are looking for a wine that resembles me, taste my Juliénas cuvée réservée. A defining moment in my life as a winemaker would be the emotion I felt when my first bottle of Julienas came off the bottling line.