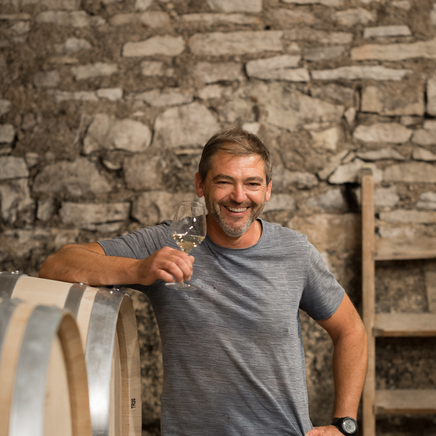 Arnaud Pelletier, before taking over the family vineyard, lived a completely different life...

Family estate located on the Côte de Beaune. We cultivate 5.8 hectares of vines in organic conversion in the Meursault appellation.

Domaine Guy Bocard has been established in the heart of Meursault for several generations. We cultivate 5.8 hectares of vines in the appellation, exclusively for white wines, with Chardonnay and Aligoté grapes. We are in the process of obtaining organic certification in 2019. In the vineyard, we work our soils in such a way as to express each terroir in its typicality, without altering its primary qualities. The harvest is done at perfect maturity to guarantee complex, ample and deep wines. The philosophy of the estate has always been oriented towards traditional methods of vinification and maturation. All our wines are vinified and then aged in French oak barrels for a minimum of 12 months, up to 24 months for our first growths. We like to offer ready to drink vintages, so we have a wine library going back to 2001!

The wine history of the Bocard family begins in the 1920s. Guy Bocard's grandfather created the estate in those years. With his wife, they cultivated 2ha of vines with the help of a horse. Charles Bocard, the second of the name and Guy's father, took over the estate in 1950. At that time, he chose to replant the vines on the estate with Chardonnay. In 1959, as mechanisation developed, he got rid of the horse and bought his first high-clearance machine. Guy's father then began to bottle his own wine and sell directly to individuals. After a few years of working with his father, Guy decided to create his own estate. He and his family moved to 4 Rue de Mazeray in 1987. Thanks to the large number of customers, Guy continued the sales to individuals initiated by his father and developed them in his small cellar. In the 90's, he decided to start exporting and, following a slowdown in activity, Guy decided to sell his estate to a French investor. The takeover was signed at the end of 2018. Guy will pass on his know-how on the 2019 vintage to the team present on the estate and in charge of keeping the name of the estate alive. He will definitively stop his activity at the beginning of 2020.

René, the vineyard and cellar master, originally from the south of France, discovered the Burgundy vineyards during a harvest season at the estate. For the next 13 years, he participated in the life of the estate. In 2019, after several other experiences on the Côte de Beaune, he has chosen to return to Domaine Guy Bocard, to make his first vintage. Our wines rest in French oak barrels for a minimum of 12 months. This ageing is carried out in the historic cellars of the estate, dug by Guy Bocard.