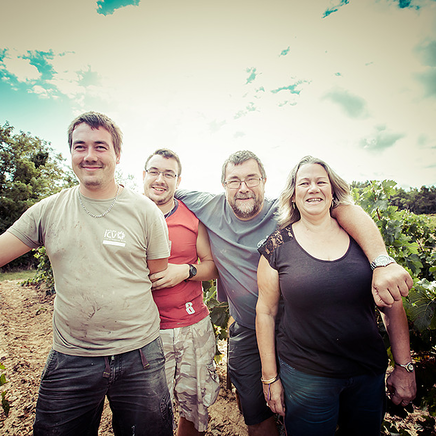 Béatrice and Jean-Marie, in their early forties, decided to start their own winery in 2003 to make their childhood dream come true. It is in a small semi-buried cellar under their house...

Béatrice and Jean-Marie both come from a long family wine tradition (8th generation for Jean-Marie and 3rd generation for Béatrice), they decided in 2003 to start a private winery, uniting their respective appellations within the Parazols estate in the commune of Bagnoles, in order to create an estate with two distinct faces and personalities. Over the years, their two children, Nans and Jason, have joined them in order to add a touch of youth to the family project and to ensure the sustainability of the estate.

Ni Ange Ni Démon...In 2005, one evening of intense reflection over a glass (or maybe two), Jean-Marie had the revelation that this new Cabardès, which was growing in the cellar, would have a name... The "Ni Ange Ni Démon" was born, and he would later explain that this name was inspired by his wife and his mother-in-law, the story not saying who the demon wasStorm under the duvet... In 2018, late one evening in January, Jean-Marie is in the middle of an intensive tasting of the 2017 vintage. At the ?th bottle of "tasted" beverage, he suddenly had a great idea ... "Storm under the duvet" was born.