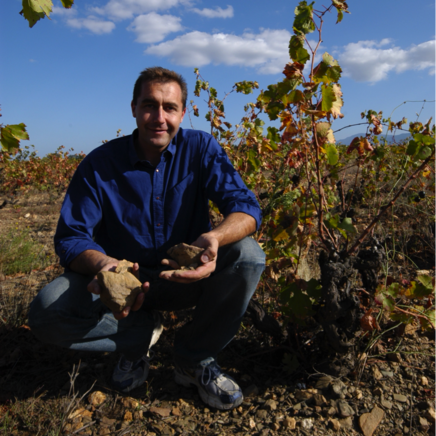 Close your eyes, you're in the Eastern Pyrenees! When he took over the family estate in 1993, which was first recognised for the quality of its natural sweet wines, Georges Puig decided to join forces with his family.

Domaine Puig Parahÿ is a family estate that has been passed down for 19 generations. It is located between the Mediterranean Sea and Mount Canigou in this region called Aspres. Its stony clay-limestone soil gives the wines very strong salty peppery and iodine aromas. The estate is divided into 10 hectares of organic vineyards and 76 hectares of conventional vines. Weeding is done with a shoe-release machine for organic vines and the entire vineyard is ploughed.


The origin of the estate has been known by several deeds since the 11th century, and the family has been on the same estates since the beginning of the 15th century (before 1435). At that time the property produced olive oil and wine. The first known taxation of the estate dates back to 1497. In the 19th century, vine cultivation replaced olive tree cultivation despite the destruction of the vineyard by phylloxera in 1878. In 1993, I took over the family property of Passa and part of that of Castelnou. It is the Duty to preserve this family heritage that pushed me to take over the estate. In my grandfather's time, the post-war period was marked by the arrival of chemicals, which subsequent generations tried to reduce and which I tried to fight as hard as I could. Until then, the estate was mainly known for its old vintages of Natural Sweet Wines. I have developed the marketing of dry wines. Since 1996, part of the production has been organic.


The wine that most resembles me? The cuvée Le Fort Saint Pierre.

This wine, the fruit of my creation, is bottled every year. Why Fort Saint Pierre? It is the cadastral name of the domain.

I like to let the terroir express itself when I create a wine.

The wine that most closely resembles our family would be dry white wine, known as "Vi rancis". It represents the accumulation of time spent. The barrels are very old and I have the will of a direct ancestor, Petri Puig, who passed on his wines, silver cups for drinking the wine, and his wine vases, in 1437.

To be a winegrower is to be present from planting to tasting. I produce, vinify, bottle, manage the accounting, welcome visitors to the estate... but what a pleasure!Teenager, I was going to sneak a little sweet wine directly on the barrels to share with the friends. My wine is different from the others, because of its unique taste coming from the so atypical terroir that is the Aspres. I appreciate my job as a winegrower because planting vines is a positive action, it is a creation. I like the novelty, that things move forward.