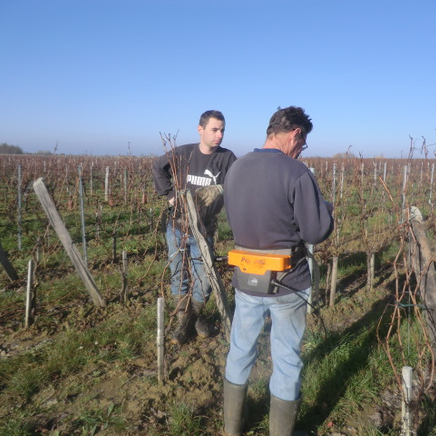 “The pleasure above all!”


Background: In the early 1900s, my great-grandfather Maurice Courty left the Dordogne to come and cultivate vines in the Libourne region and met Cécile there. After a few purchases of vines and land in Néac and Montagne, he created Château Lafleur Châtain. Work carried out on other properties has allowed it to expand.
After working on the property my grandparents Marie-Thérèse and Robert Courty took over in 1960. They are committed to growing and flourishing the property by starting to develop the sale of bottles to private individuals. In

1985, the property was divided between their three children, my father Serge Courty and his two sisters.

That same year my parents Joëlle and Serge created Château Maine Chaigneau. Little by little, when they ceased to work, they bought back some of the plots of land owned by my grandparents. After a few years of trial and error, they created the Cuvée JS in 2008. In 2011, one of my aunts ceased her activity, so I bought some of her vines and put them at the castle

In 2012 they created L'EARL Vignobles Courty to prepare the transmission, in 2014 I started working on the estate. In

2014, we will integrate the EMS for Bordeaux wines to limit and control our impact on the environment.

In 2017 I became manager of the company, that same year we obtained the HVE certification (high environmental


I settled in 2014 to take over the family estate. I have always wanted to do this job and continue the history of the estate for the 4th generation. On the estate we produce 4 different wines: Lalande de Pomerol cuvée JS 100% Merlot, aged for 12 months in new barrels Lalande de Pomerol, our largest production 80% Merlot and 20% Cabernet Franc Montagne saint Emilion, 80% Merlot and 20% Cabernet Franc Rosé Douceurs D'Automne, which is a soft VSIG Rosé that we have created for an aperitif or dessert for example.