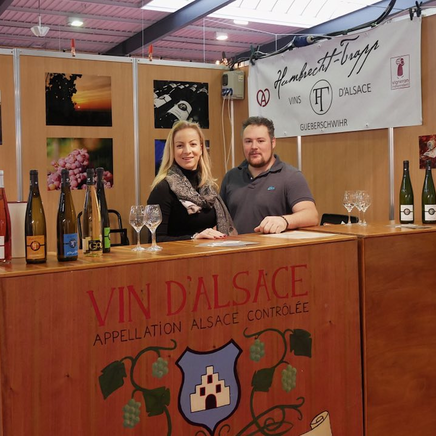 Located in Gueberschwihr I am the 3rd generation of the Humbrecht-Trapp House. In the family environment I perpetuate traditions while bringing a touch of youth and modernism...

Located in Gueberschwihr I am the 3rd generation of the Humbrecht-Trapp House. In the family environment, I perpetuate traditions while bringing a touch of youth and modernism.
Today we have 7 ha of vines and produce all the grape varieties, as well as the Crémant, Vendange and Sélection De Grains Noble.

Humbrecht-Trapp was founded in 1949 after the marriage of my grandparents, both of whom owned vines (the Humbrecht family having been winegrowers in Gueberschwihr since 1620) and both began to market bottled wine. In 1967 at the age of 14 my father joined them on the farm. Over the years, many changes have been made: purchase of vines, equipment, expansion work. In 2007 after an apprenticeship at the agricultural high school in Rouffach, it was my turn to join the adventure. After 5 years my father leaves me his place as manager on January 1st, 2013.

For the Anecdotes... The best thing is to bring the food to the cellar!