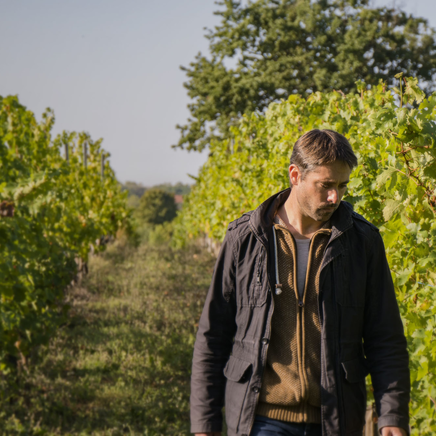 In the heart of a preserved hilly site where vines, groves, hedges, fruit trees and vineyards are intertwined, the Clos du Breil estate is flourishing. The soil is poor, limestones and flints are mixed and...

In the heart of a preserved hilly site where vines, groves, hedges, fruit trees and vineyards are intertwined, the Clos du Breil estate is flourishing. The soil is poor, limestone and flint are mixed and intermingled. It is this demanding, distinguished terroir that makes it possible to produce generous, distinctive wines with a strong character that expresses its own proud identity.

The first wines of the estate were produced in 1850. The estate was then in mixed farming and remained so until the early 2000s. It was in 1994 that the first wines of Clos du Breil were bottled by Nadine and Jean Vergniaud. Today the estate is exclusively dedicated to the production of quality wine. In 2009, Yann Vergniaud joined his parents. The vineyard has been restructured with a systematic search for the best terroirs in order to offer the most complete possible selection of parcels for each of our vintages, and we now focus our production mainly on respecting our environment by using exclusively an intercept to weed between the vines and the hoeing technique for working the soil.We have chosen to plant grape varieties that are not very prominent in our appellation but which flourish remarkably on our terroirs, namely Cabernet Franc, Cabernet Sauvignon and Malbec.

Our job as winegrowers is above all a link between our terroir and the wine lover. We are simply the craftsmen of a know-how that is constantly evolving but whose objective is to highlight a place, an identity. We do not pretend to produce the best wines in the world but to offer the most beautiful reading of our terroirs, the respect of the specificities of each plot is also materialized in the maturing process which can be enhanced by ovoid vats, our job is also to listen to our environment. We have chosen to plant a Georgian grape variety that is particularly adapted to water stress in order to cope with dry periods. We are the first in France. We are constantly looking for new ideas and sharing experiences is the driving force behind our passion.