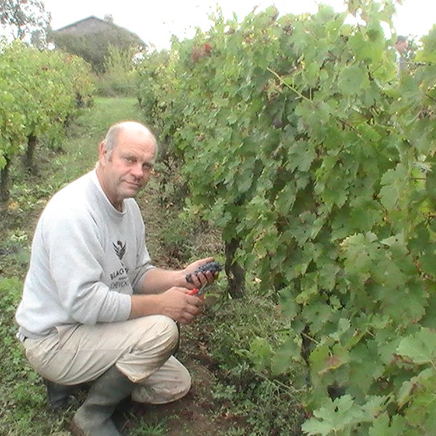 “From Medicine to Viticulture ”

The estate is located in the hills of Fronsac, in the Bordeaux region. It is a small property of 3 ha 37 on a clay and limestone soil with underground quarries under the vines...


The estate is located in the hills of Fronsac, in the Bordeaux region. It is a small property of 3 ha 37 on a clayey limestone soil with underground quarries under Merlot and Cabernets Sauvignon vines. The old 15th century fortified farmhouse bought in 1989, after being attached to the vines that surround it in 2005, is now offered as a charming cottage. The estate has been organic since the beginning and certified biodynamic (Demeter) since 2015. In the vineyard, I do not use fertilizers or compost. Only a grassing, liquid manure and herbal tea with my plants. I have many very diversified hedges, and I practice late mowing, all this is done to protect biodiversity by leaving insects and little loves to find shelter. For the harvest, the grapes are harvested by hand with a double sorting on the vine and on the table. The team is sensitized and the spiders are put back into the wild. For vinification, it's even easier, I don't use any inputs. In the years when I filter I use tangential filtration on ceramics.

Some of the buildings are very old, a tower called "Plantagenêt" would deserve historical research. After being separated from his land, in 2005 I was able to buy the rest of the surrounding agricultural land and embark on the wine adventure because the previous owner had delegated the production on a farm to the local cooperative. The village elders remembered that in the past these plots gave an excellent wine. My profession as a veterinarian had already allowed me to get a taste of the agricultural world and I enjoyed the challenge! In 2015, I was able to create a cellar on the estate, thus creating a coherent whole where it is good to work! Not yet retired, I thus work in two professions at the same time but always in coherence since biodynamics on the one hand and alternative medicines on the other.... It was a great satisfaction to be included in the list of honour of the winegrowers in the Guide Dussert-Gerber.

My first job at the estate is to make a wine that I love and that I can enjoy sharing with friends. My guiding principle is to learn and respect a terroir and a place, in order to produce a sincere and authentic wine that reflects the terroir.