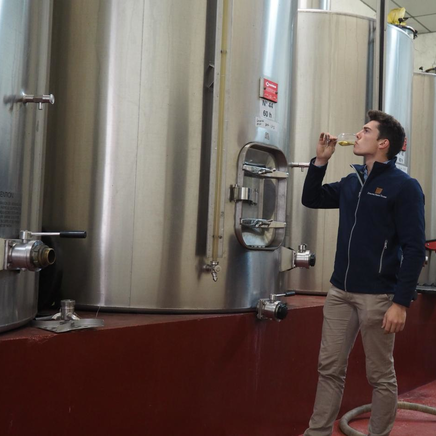 Domaines Pierre Tourré is a group of four properties on three different sites: Cerons, Loupiac and Romagne in the Gironde department. Today the estates comprise about 100 hectares. The HVE certification, which we received in 2019, attests to the respect, for the whole farm, of environmental performance thresholds concerning biodiversity, phytosanitary strategy.Appellation LOUPIAC The vineyard is located around the commune of Loupiac on the right bank of the Garonne, opposite Sauternes, 40 km from Bordeaux. The hillsides of Loupiac offer the best conditions for the development of the vine. These small hills, whose subsoils are limestone at their bases and clay-gravel on their summits, have been softened by erosion. Three grape varieties give the wines flavour, tone and character: Semillon, Sauvignon and Muscadelle. They bring an aromatic finesse, a soft and elegant freshness. GRAVES appellationThe Graves appellation area of the estate is located on parcels of land in the commune of Cérons, on the left bank of the Garonne. The Graves region owes its name to its soil. It is made up of deposits of small round white pebbles (gravel and pebbles) often mixed with sand and clay, deposited by the Garonne river. For the white wines, the grape varieties grown are Semillon, Sauvignon Blanc, Sauvignon Gris and Muscadelle. As for the red wines, they are Cabernet-Sauvignon, Merlot and Cabernet Franc. Appellation BORDEAUXSituated in the Entre deux Mers, the vines are concentrated on the slopes and the central plateau of the area and avoid the more humid zones. The soil is essentially clay and limestone, favourable to the cultivation of Sauvignon, Cabernet Sauvignon and Merlot.

I took over the management of 25 hectares of land that had been in the family possession for three centuries. In fifteen years, I managed to quadruple the surface area of the estate by grouping together different parcels through new acquisitions. Today, the estates comprise about 100 hectares of vines and include four appellations. Pierre Tourre Owner

Without man, the terroir is nothing, just a hope. The winegrower's job is to bring out the best in the terroir, both in the vineyard and in the wine-making process. At the same time farmer, craftsman and merchant, he shapes his wines from the vineyard to the bottling.