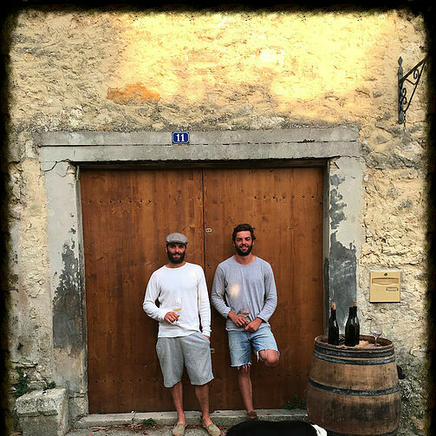 (6 ratings)
“Rough diamonds among the nuggets of natural wines!”

Son of a winegrower, the family estate was sold in 2014. The best plots have been bought back to preserve a heritage of several generations. The philosophy of viticulture and...


Son of a winegrower, the family estate was sold in 2014. The best plots have been bought back to preserve a heritage of several generations. The philosophy of a so-called "natural" viticulture and winemaking to get as close as possible to the terroir and let the wines express themselves. DEUS EX MACHINA

Artisans of an agriculture based on respect for people and the land The Frères Soulier are already recognized as rough diamonds among the nuggets of the "natural" wines movement and which offer straight and sincere wines.


With their hands in the ground, their hearts in the wines, they have the shoes that itch to kick the train of preconceived ideas about wines and those who would judge them too quickly. Why? Why? Because today it takes courage to work on horses, to breed a herd of goats and sheep to allow a grassing of yesterday or a little madness to plant since 2014, old grape varieties are reintroduced: Counoise, Picardan, Vacaresse, Terret Noir and Muscardin. They are architects of their 8ha estate created in 2014 in the commune of Saint Hilaire d'Ozilhan in the Gard in the Cotes du Rhône Villages appellation. All other green tasks are done by themselves and manually. You should see them do it!!!!!

The farm covers 6 ha in one piece on limestone scree facing North, North-West. 2 other ha are on rolling pebble soils. The grape varieties are Syrah, Grenache and Tempranillo, the oldest grenaches were planted in 1954. In vinification the wines are worked without suffering for the great vintages. No other inputs are used, no filtration or fining. Bottled with residual gas to protect the wine naturally. Decanting is recommended.

The history of the estate was initiated by internships in various fields, particularly in Burgundy. The estate is keen to maintain its own identity by separating itself as much as possible from the wines tasted and from current oenological concepts. Soil life: the estate pays great attention to soil respect, the debate on the current sulphur-free status is far too controversial. Viticultural practices should be given greater prominence. Biodynamics has, by definition, the objective of restoring soil fertility, winemaking is only an accompaniment.