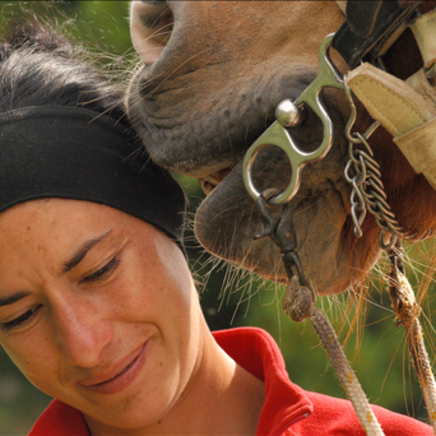 "Our house is built one step above the plain: fifty leagues of horizons, dominated by the perfect cone of the Ventoux, hold it in view. As far as I can remember, it's been a....

"Our house is built one step above the plain: fifty leagues of horizons, dominated by the perfect cone of the Ventoux, hold it in view. As far as I can remember, it is to the spectacle of this valley that I owe my first aesthetic emotions:"Biodynamic family estate located in the south of the Ardèche in the Rhône Valley.

The Thibon family bought Libian in 1670, Gustave (1903-2001) worked the land in the absence of his father during the First World War and then turned to philosophy, his third child, Jean-Pierre, married Jacqueline in 1974. Cardiologist, she'll give up everything for the vine. They got married and had...many daughters: Helen, Catherine and Cecile. All 3 in the wine.... A son-in-law, Alain, then a grandson Aurélien came to "balance" this family....... Today, it is 4 families, 3 generations who work and live in Libian... The family is above all "peasant", always in organic, then in biodynamics (DEMETER certification), we are accompanied by two draft horses Nestor and Bambi.This "agricultural organism" mainly produces wine but also feeds the people who live there (olive oil, honey, abundance of vegetables, cereals and fodder) We are responsible for this heritage and we must transmit it with respect for the earth and the living world... As Colette says so nicely "The vine, the wine are great mysteries. Alone in the vegetable kingdom, the vine makes us understand what the true flavour of the earth is. What fidelity in translation!". And above all, let us not forget: "Water is for thirst. Wine is, according to its quality and terroir, a necessary tonic, a luxury, the honour of food."

"The peasant is above all a connected man - a man steeped in bonds. It is first of all linked to the earth. He is bound to the earth by his most carnal and immediate instinct. The profession of farmer is the one where instinct and duty coincide. While in some professions, one can succeed through intrigue, lies, flattery, etc., the peasant can only pursue his interest (at least in the long term) by fulfilling his duty as a peasant, by submitting to the needs of his state. A merchant can deceive his customers, a financier can get rich by unhealthy speculation, a politician can find success by manipulating crowds, while the farmer has only one way to improve his material lot and that is to work more and better. For him, there is no plot, no evasion, no system: we do not deceive the earth. He is bound to the earth by his ideal. The soil where he was born and which nourishes him, this soil to which he is attached by all the fibres of his being, is not only for him an instrument of profit; beyond any material calculation, he puts in his work his concern for perfection and his sense of beauty. The pride of tracing a straight path, of owning the most beautiful vines, orchards and gardens, the best worked land or the most beautiful animals in the village far exceeds the appetite for gain; born from the land and fed by it, the peasant loves the land as a child loves his mother, and, conversely, this land that awaits everything from him, he loves him as a mother loves his child. He is linked to his family (family work...) And he is linked to the past, to tradition (wisdom of old farmers...), etc. It is all these links that generate peasant realism. And then the earth gives nothing for nothing, the peasant cannot fall asleep in false security, he must constantly struggle and give much of himself for ever uncertain results (as long as it is in the hands of the good Lord...). Patience (in nature, everything is slowly accomplished) flexibility before fate: there are blessed harvests, and others that are lost... The farmer has not only a sense of effort, but also a sense of risk; the earth can do nothing without him, nor him without it. He delivers nothing by chance, but he entrusts everything to fate; he remains plastic before life. Certainly, it has its flaws. "Down to earth", clinging to material things... (Conversation with a small official who criticized them, who reproached them for their materialism, their greed for profit, their greed. Answer: when you have earned your living by scraping the earth, then - these defects - if you have not acquired them, you will have the right to criticize them!) Yes, the peasant is "close to his money": it is because for him money is the foundation of higher values (difference between "the money" and "the good", money is redeemed: it contributes to guarantee the heritage, to keep his honour, to ensure one another thousand free services... "Gustave Thibon, "the peasant realism" (extracts)