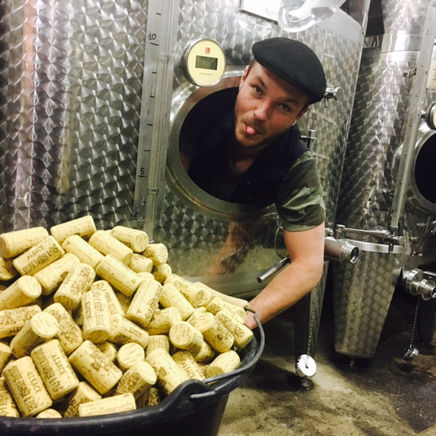 4 generations of independent winegrowers, putting forward the work of the vine in the greatest respect of the soils, the traditions and the nature. Located on a seismic fault, the family plot rests on 7 different soils revealing a unique and varied aromatic palette in our wines. Since 2018, and after 10 years of integrated farming, the estate has gone organic. We also have guest rooms so that you can discover and live our passion in the heart of our farm.

It all began in 1932 when the first generation of winegrowers in our family started. At that time, most Alsatians produced their own wine for personal consumption, combining vineyards, cereals, animals, market gardening... Joseph Fahrer was one of the first inhabitants of Saint-Hippolyte to bottle his wine in order to sell it. He started by trying to sell about 600 bottles by putting up a simple sign in front of the house "sale of wine". Joseph and his wife Maria had two children, a son Armand and a daughter Jeanette. In 1954, he decided to stop cultivating and breeding in order to concentrate exclusively on the production of AOC Alsace wines. With the help of his wife Liliane, and taking advantage of the 60's, 70's and 80's which were favourable to tourism, wine sales and consumption, the couple, representing the second generation of winegrowers, developed the estate, creating a storage cellar, a vinification cellar, a sales area and producing rich, fruity wines which gave the family estate its letters of nobility.Armand and Liliane gave birth to two daughters, Danièle in 1959 and Sylvie in 1963. This is how the 3rd generation arrived. Sylvie, from a very young age, was passionate about the world of wine and in 1998 she was joined by her partner Yvan. In 2011, Sylvie was joined by her son Raphaël who, today, is entirely in charge of the elaboration of the AOC wines of Alsace, taking very much to heart his family heritage as well as his role of independent winegrower. He works his vineyard with the greatest respect for the vines and the terroir. Today, the small family business has 10 hectares of vines located in the communes of Saint-Hippolyte and Rorschwihr. Enjoying an exceptional geographical situation with 7 different terroirs, you will be able to taste wines with unique typicities where everyone will find his happiness. We invite you to come and discover them!

Wine is about sharing, conviviality and discovery!