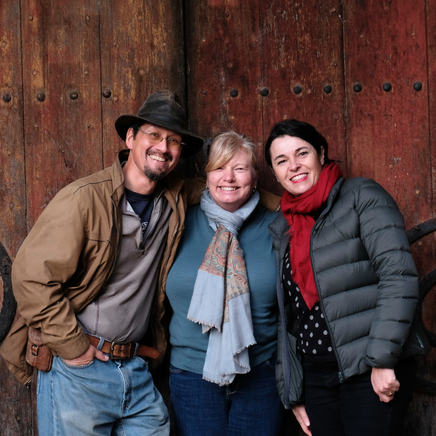 "Wines that have inherited a long history but have been revisited by the New World"...

"Wines that are the heirs of a long history but revisited by the New World". Protected by the foothills of the Cevennes, the estate extends over 40 hectares in a preserved valley at the northern end of the Terrasses du Larzac appellation. The soils are mainly clay-limestone. These factors combine with a multitude of slopes and exposures to form a very wide range of terroirs. Although Mediterranean, the climate is tempered by the altitude and the surrounding mountains (Mont Haut and Plateau du Thaurac). This results in cool nights and more acidity in the grapes. The diversity of the terroirs, the grape varieties (17) and the thermal amplitude allow us to produce wines known for their energy and elegance. Our name evokes the two springs that cross the property but also the two couples who came together to make these wines of passion.

The presence of vines in the Montoulieu Valley dates back to antiquity: the present estate was built on the foundations of an ancient Gallo-Roman villa. The Damais family took over the almost abandoned Devèze estate in 1963 and developed it for more than 50 years: planting improved grape varieties (Syrah, Carignan, Viognier), creating one of the first private cellars in the region. In 2017, Hélène Taillefer, after several experiences in the food industry and 20 years spent abroad, undertook her reconversion to wine growing. It was there that she made two encounters that changed her life. First, she met Kirsten and Glen Creasy who had just left New Zealand and were looking for a new wine venture in the Languedoc. Glen is a research professor of viticulture at the University of Lincoln and author of 'Grapes', an international reference book. Kirsten is a winemaker with 30 years experience as an oenologist in France and abroad. A few months later, Hélène met the Damais family and discovered that her father and Marcel Damais came from the same plain of the Chelif and even had mutual friends. From these two unlikely coincidences, Terre des 2 Sources was born: a preserved eden but also a story of encounters and human adventure.

Our philosophy is to work in harmony with a remarkable environment and to preserve its beauty and diversity for future generations. To mark this commitment, we have begun the conversion of the estate to organic viticulture. Off the beaten track, the estate is located on the edge of the Massif du Bois de Monnier, an ecological natural area that is home to remarkable flora and fauna. Between wadis and avens, the garrigue takes on the colours of the African savannah and is a privileged place for 150 species of birds, including the famous European Bee-eater, which is found on some of our labels.