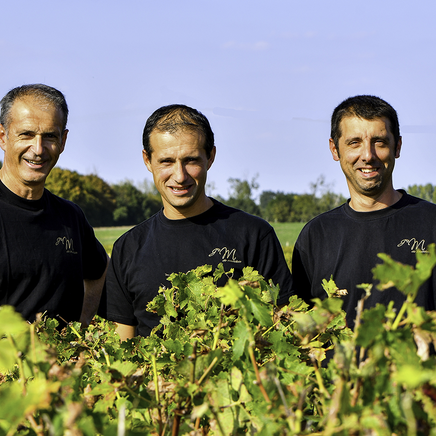 The Vignoble Malidain is: a family winery since 1954, located in the Muscadet Côtes de Grandlieu PDO, not far from the Lac de Grandlieu. 45 hectares of vines are worked in the most g....

The Vignoble Malidain is: a family winery since 1954, located in the Muscadet Côtes de Grandlieu PDO, not far from the Lac de Grandlieu. 45 hectares of vines are worked with the greatest respect for the environment by three Malidain partners: the two brothers, Romain and Freddy, and their uncle Christophe. The vineyard is indeed managed in terra Vitis and the three partners produce vegan wines. Muscadet Côtes de Grandlieu sur lie, Chardonnay, Sauvignon, Muscat sec et moelleux, Viognier, Grolleau, Pinot noir, Merlot, Cabernet franc... here is a beautiful rich and varied range!


The Vignoble Malidain is located in the village of "Demi Boeuf" in the commune of La Limouzinière. To know what this term means, a little history is needed... While the Vendée wars were in full swing on the hills along the Logne, a group of royalist forces fighters, taking advantage of the welcome of the inhabitants, were happily eating. They had roasted an ox and were starting to cut it up and share it with each other. Suddenly, warned that the Republican troops were approaching, they had to regrettably abandon about half of their feast to disperse in the surrounding countryside. Thus the half ox unintentionally offered to the enemy gave its name to our locality, then to certain vintages of the Vignoble Malidain.

The Muscadet Côtes de Grandlieu PDO, the latest of the Muscadet sub-regional appellations of origin in 1994, is the most western and closest to the Atlantic Ocean. It benefits from a microclimate that favours the early growth of the Melon B grape variety, thanks to the proximity of the 9000 hectares of water on Lake Grand-Lieu!