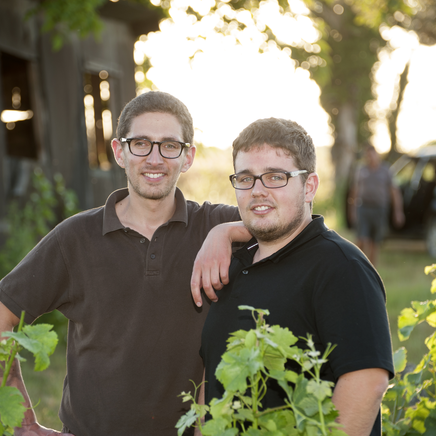 After their training, Clément and Florian Berthier returned to work at the family estate located on both sides of the Loire River. They manage the 25-hectare vineyard in sustainable agriculture, without any pesticides.

After their training, Clément and Florian Berthier returned to work on the family estate located on both sides of the Loire River. They manage the 25-hectare vineyard using sustainable agriculture, without pesticides or anti-botrytis, and produce excellent wines with a low sulfur content.

In the 80's, Jean-Marie settled in Sainte-Gemme-en-Sancerrois, his wife's village where they built together the Domaine des Clairneaux. In 1998, they took over the Domaine de Montbenoit, in the Coteaux du Giennois, a vineyard that his father had worked for many years. On both sides of the Loire, born from the union of these two estates, Vignobles Berthier offers several appellations of the Centre-Loire, Sancerre, Giennois and Pouilly-Fumé. There are a total of 25 hectares of vines cultivated in sustainable viticulture, on different terroirs, mostly composed of flint, limestone and clay-limestone.
In 2012, Clement (the oldest of the siblings) joined the company after spending 2 years in Canada and the United States as an assistant cellar master in the Willamette Valley. Following his arrival, they started working with friends on the Pouilly Fumé appellation. The result of this association, a Pouilly-Fumé on Kimmeridgian soils, a true terroir wine. The following year, Florian (the youngest), returned home after perfecting his winemaking skills in Burgundy, New Zealand and Oregon. Shortly thereafter, in 2015 they took over Domaine de l'Oselier, in the northern part of the Coteaux du Giennois appellation, very old vines (between 35 and 100+ years old) only on flint soil. The young winemaker manages the vineyard in a sustainable culture without herbicides, pesticides or anti-botrytis. At the center of this culture, a work of the ground which makes it possible to sublimate the soil. Clément manages the vinification and marketing of the wines. "As far as vinification is concerned, we do as little as possible because 80% of the work is done in the vineyard. All stages of the winemaking process are carried out with great care to keep our wines with low levels of sulfur, to help us do this we use the CO2 naturally present in the wine, which protects it from oxidation."