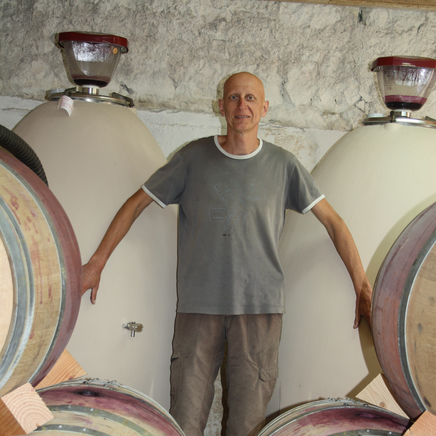 (46 ratings)
“The guardian of an ancestral know-how”

The Bruneau-Dupuy estate is a long family history, and now it is me, Sylvain and my wife Angélique, who will manage the vineyard... We only produce St Nicolas de Bourgueil,...

Domaine Bruneau-Dupuy is a long family history. Today it is Sylvain, the winegrower, and his wife Angélique, who manage the vineyard. Located in the Saint Nicolas de Bourgueil appellation, the couple only produce their wines in this appellation in 100% Cabernet Franc.

The soil is 2/two thirds on sands and gravel and another third on clayey-limestone slopes. Since 2013, Sylvain has been managing the vineyard in organic agriculture. At the estate, respect for the growing environment is essential. In fact, it is since 2006 that the milestone has been reached, and that the Loire winegrower has started to work all his soils according to the principle of organic farming.

For Sylvain, tilling the soil is a bit like working with wood: there is a noble side: "that's why the word "terroir" takes on its meaning!"

Sylvain and his wife moved to the estate in 1998. The winegrower has therefore "inherited" well-rooted vines from his parents and grandparents (paternal and maternal). It has been organic since 2006 and started the "administrative" conversion in 2013.

"For me, wine is above all about sharing, emotions, joy (except when it is not good...). I think it reflects a personality: you make a little bit of the wine you love, while trying to please as many people as possible. I don't necessarily have a guru or mentor: I'm more of a self-taught person, while listening to my family and friends."

"My oldest wine-related memory remains when I went to Montagne Saint-Emilion for 2 years. I tasted all the classified growths of Sauternes 1989 (except Yquem): it was fabulous!"