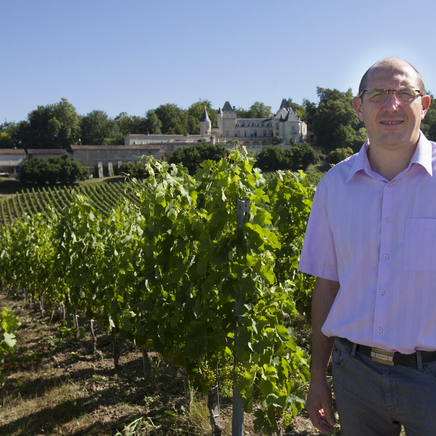 A "château de la Loire" set on the heights of a magnificent appellation on the right bank of Bordeaux, that's a bit like Château de La Rivière. It dominates part of the Dor valley...

100 hectares of land including 65 hectares of vines planted with a majority of Merlot on the clay-limestone hillsides and plateaus of Fronsac. This chateau has a rich history and holds many treasures, the most surprising of which is undoubtedly its underground cellars dug in the 18th and 19th centuries. The conditions are perfect for the ageing of the wine: 13°C all year round, with a humidity level close to 100% and total darkness.

Mr René Mortier-Quarré, owner at the beginning of the 20th century, decided at the time to buy an additional property to enlarge the Château de La Rivière. He bought the Domaine de Pasquette and the Clos Laborie, which he sold in 1920 to Mr Jean Balluteaud. In 1960, the latter sold the property to Mr Jacques Borie who owned it until 1994. He had the ambition to improve his wine and created a second wine which he named "Le Prince du Château de La Rivière". In 1994, Mr Jean Leprince bought Château de La Rivière. We could go on like this, but come and visit us as the story begins in 769 with Charlemagne!

Being a winegrower is a way of life that combines a passion for the land, a passion for life, a passion for taste and a passion for sharing, transmitted from generation to generation. Defining the wine that most resembles us is extremely complex, we must rather see and understand that there are wines for each moment of our lives, each occasion depending on the people with whom we share it.


Recently for the New Year, we opened a 50 year old bottle harvested in 1966. This Château de La Rivière, in imperial style, was surprising, confirming that our wines have the promised capacity to age. A delight that was demonstrated at the end of the meal: this beautiful 6 litre bottle was completely empty! The oldest bottle we own is a double-magnum (3 litres) from 1928, vinified at the time by Mr Jean Balluteaud, almost 90 years ago!