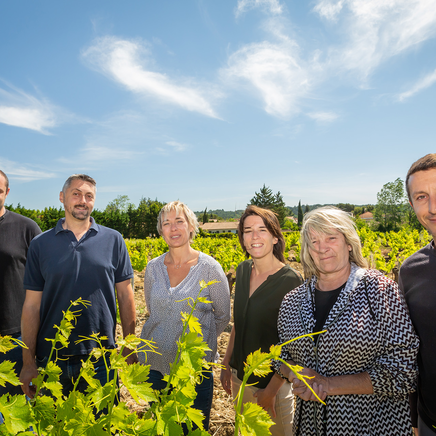 The Château des Coccinelles is located in Domazan, in the south of the Rhone Valley, near the most beautiful historical sites, between the Pont d'Avignon and the Pont du Gard. The d...

The Château des Coccinelles is located in Domazan, in the south of the Rhône Valley, near the most beautiful historical sites, between the Pont d'Avignon and the Pont du Gard. The estate covers 80 hectares which stretch around the Signargues plateau, a terroir of excellence, distinguished by its exceptional geological history. Facing south/south-east and swept by the Mistral 200 days a year, this former bed of the Rhône has the same rolled pebbles as its prestigious neighbour Châteauneuf-du-Pape. But its uniqueness lies in the composition of its soil, which is more clayey at the bottom than at the top, providing a buffer effect and allowing the vines to be fed with water. This is a major asset that plays an important role in the balance and finesse of the wines.

The Fabre family, owner of Château des Coccinelles, has linked its destiny to wine since the beginning of the 20th century. But it was really in the 1970s that the estate gained in fame, with the arrival of René Fabre at its head. By carrying out a real work of knowledge of the terroir and by questioning the cultural and oenological methods of the time, he will considerably improve the quality of his wines. Thanks to him, Château des Coccinelles is part of the very closed circle of the first wine estates to have obtained the organic label in 1978. Driven by this very strong desire to preserve his vines and the nature that surrounds him, René Fabre chose to join the Association Nature et Progrès. Together they verbalize their commitments in an "organic" specification that they will have validated in 1974 by the Ministry of Agriculture. They will be the precursors of Organic Agriculture and the first defenders of clean and responsible viticulture.

The estate has maintained the same line of conduct throughout the years and still produces organic wines, all balanced, greedy and fruity. And to celebrate its 100th vinification, Château des Coccinelles has produced a special sulphur-free cuvée named after the double wings of the ladybirds: "Elytres". Very involved, Jean-Baptiste Mangin coordinates the evolution of the estate and the viticultural management, always combining respect for the environment with more modern equipment. For example, by choosing the vino-lok cork for his Signargues vintage, made of glass, a neutral material par excellence. After several years of testing, it has been proven that this vino-lok cork significantly increases the wine's ageing potential (by rarefying oxygen during bottle ageing) without any risk of variation from one bottle to another. The vintages, recognizable by the ladybird on the label, are very present in France and are also exported. Mainly in Northern Europe, North America and Asia.