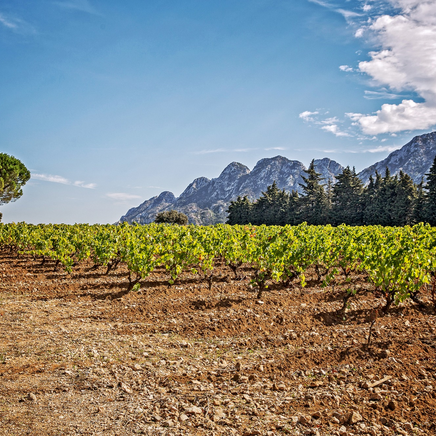 (58 ratings)
“One of the first architectural chairs in France!”

Château Romanin is the encounter between Nature, fierce and wild, and Man who shapes it in his image. Spread over 58 hectares, located on a large terroir of red wines from the Les B...


Château Romanin is the encounter between Nature, fierce and wild, and Man who shapes it in his image. Spread over 58 hectares, located on a large red terroir of the Les Baux-de-Provence appellation, the vineyard is composed of a scree soil whose stones capture heat during the day to release it at night and take advantage of the refreshing faculty of the mistral. Protected by the scrubland, olive trees and almond trees, the vine clings to the ruins of a 13th century castle of the Templar Order with its rich historical past.

Here again, the elements come together in respect and harmony. They operate unique phenomena that perfectly accompany wines and olive oils, fruits of the earth, the sun and the moon, and carried by the work of men.


In 2006, the two lovers of Provence, Anne-Marie and Jean-Louis Charmolüe, set their sights on the Romanesque castle. After many years at the head of Château Montrose, it is in the Baux de Provence appellation that the adventure continues for this couple, far from being a novice in the wine landscape.

When they acquired Château Romanin, inhabited by an energy as strong as the one that runs through the site with its undeniable potential, Anne-Marie and Jean-Louis Charmolüe aspired to take up a double challenge: to write a new chapter in the history of the estate and produce exceptional wines. The couple then embarked on a journey that blended the precision and demands of the great estates, transcended by the hedonism of the place and the sharing of emotions. The perfect balance is apparent for deep, generous wines and olive oils with the flavours of Provence.

The beginning of 2018 is still marked by the death of the visionary and great winegrower Jean-Louis Charmolüe, a man who used to say: "Great estates always have a history. »

Anne-Marie Charmolüe, owner and manager of Château Romanin, continues her commitment to excellence. Driven by her duty and her desire, she is committed to writing a new history in Provence.


Our vineyard and olive grove have been biodynamically managed since 1989 and we respect the techniques of agronomy by taking into consideration the plant, the soil, the water, the wind and the work of mankind in order to express the terroir as best as possible.

Château Romanin is magnified by a cellar, a true underground cathedral. The place is amazing, combining ancestral techniques with the technicality of modern materials. In this cellar, the wines find the right setting for their maturation with total respect for the living molecules that compose them.