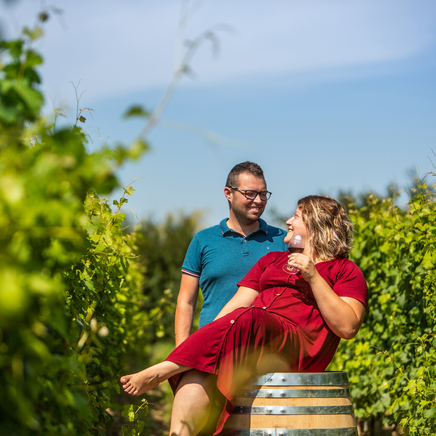 Les Coteaux du Lyonnais is the link between Beaujolais and the Rhône Valley. Our estate is located in Taluyers, our vines are on granitic soils. Among our AOC grape varieties, n...

Domaine Prapin is above all a family love story since 1890. The vineyard extends over 11 hectares of vines labeled organic agriculture in AOC Coteaux du Lyonnais, a small confidential appellation in the heart of the Monts du Lyonnais. Since 2012, Lucie cultivates her vines in biodynamics and the grape harvest is manual.

The Coteaux du Lyonnais is the link between the Beaujolais and the Rhône Valley. Our domain is located in Taluyers, our vines are on granite soils. Among our grape varieties in AOC, we cultivate Chardonnay but also Gamay. For our Vin De France, we use Viognier and Gamaret. Since 2012, in addition to our organic farming approach, we practice Biodynamics and harvest by hand to respect the grapes. It goes without saying that all our wines are vinified with the greatest respect for the grape harvest and fermented in a natural way, the only input used is sulfite for some wines, but always in very small doses.

In Roman times, the legions settled in the Monts du Lyonnais to produce wine. A Gallo-Roman wine villa was found 500m from the estate as the crow flies. A mosaic with Dionysus and his adoptive father Silene was discovered in 2012. Today we are working on our doyenne which was planted in the 20th century. In 2015, we made our first vintage in amphora (a small nod to our ancestors, the Romans). Our greatest pride: the trophy of the Best Gamay of the World in 2015 with our red Antica vintage!

"All this energy and reflection in the cellar has the simple objective of pleasure and respect for the consumer.
Through our wines of pleasure you can discover and share our love for wine. The phylloxera crisis ravaged the vineyards and did not spare ours. Following this event, it was in 1903 that the oldest vine of the domain was planted. Seeing the potential of this exceptional terroir, my family continued to plant vines.