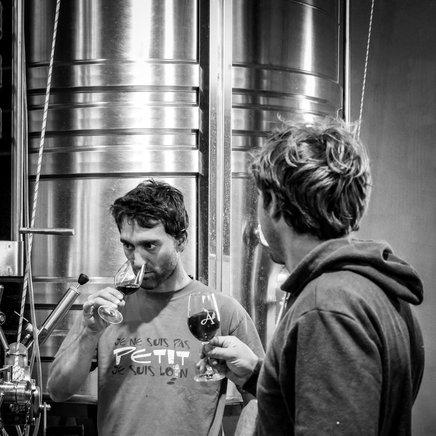 The terraced plots of Domaine Farge look like stairs for giants!

The Domaine Ferme des Arnaud is a family vineyard that has been passed down for many generations. An organic estate since 1978, the vineyard produces wonderful wines in the heart of the Haute-Pr...

The estate is a family vineyard that is passed down from generation to generation. Historically, it was Papé Yves, who planted the first vines in 1940 on land abandoned during the war. When his son Pierre took over the vineyard, they took the courageous decision to join the organic business in 1978! The estate was taken over in 2008 by Pierre's youngest son: Martial, an oenologist by training and enriched by a formidable experience in New Zealand. In 2013, the eldest son, Samuel, an electronic engineer by training, joined his brother. The domain then takes on a new dimension towards a new future.

"My father Pierre's experience and my brother Martial's science, combined with my new perspective on the world of wine, are the foundations of our work that give our wines: openness, balance and originality."

"Our true pleasure is to work with the living: man, earth and plant."