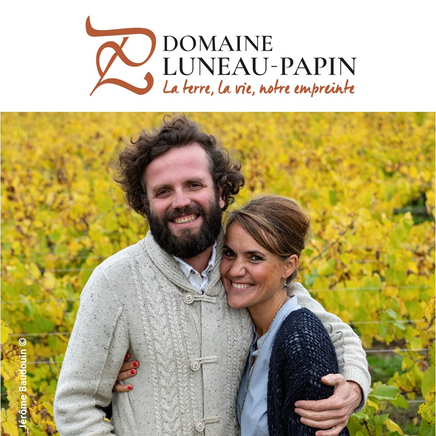 20 kilometres from Nantes, south of the Loire, the vineyard of Domaine Luneau-Papin covers 38 hectares of vines on the sunny slopes of the Sèvre et Maine. The estate is a regular at the Great...

20 kilometres from Nantes, south of the Loire, the vineyard of Domaine Luneau-Papin covers 38 hectares of vines on the sunny slopes of the Sèvre et Maine. The estate has been a regular of the Great Guides for several years now. The RVF, Gault & Millau, Bettane & Dessauve guides congratulate each year the quality of the Muscadet parcel vintages and the starred restaurant tables honour the estate's vintages by putting them on their wine list!

Since the middle of the 17th century, the Luneau-Papin Estate has been planted with the Melon grape variety, called "Muscadet", which is native to Burgundy. This Muscadet has found its favourite soil, consisting of mica schist, schist, serpentinite, granite and two-mica gneiss. The estate jealously guards its treasures in a cellar equipped with constant temperature and hygrometry of the great vintages of the last forty years.

We are the ninth generation of winemakers. Respectful of the experience brought by the previous generations, coming from 2 families Papin and Luneau, we perpetuate the family tradition by breeding a Muscadet de Terroir which makes the reputation of the Domaine Luneau-Papin.

Each Clos is harvested by hand, vinified and matured separately, respecting the authenticity of the characters of each terroir. Since 2009, soil cultivation has been resumed and extended year after year to the entire plot of the property. Since then, we have been making progress in order to offer you, in the very near future, the entire estate converted to organic farming. Pebble after boulder, we build with ardour, wisdom, innovation, respect for everyone, assurance, prudence, questioning and love. In the palm of our hands!

"The vine the wine, the vine the wine." This sentence often comes back as a joke between my husband, Pierre-Marie and me, as this universe is so vast and nourishes us every day. A bottomless well that takes us and our bottles across borders and oceans. A magical world of wine that offers us the opportunity to meet all cultures and share moments of life with many of our consumers.

We have a great chance to make our dreams come true, with our feet in the ground and our heads in the stars. Our wines can be found on Japanese, English, Singaporean, Thai, German, Belgian, Canadian and American tables... And they are on first-name terms with wines from all over the world.