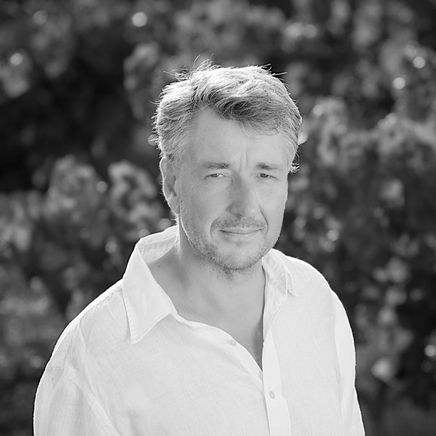 The Mas, 9 hectares of vines situated on a beautiful and captivating 40-hectare terroir between Montpeyroux and Saint-Jean-de-Fos, was almost in ruins when Erik Gabrielson fell in love with it. The Mas is located in the heart of the village of Saint-Jean-de-Fos.

Le Mas, 5 hectares of vines located on a beautiful and captivating 40-hectare terroir between Montpeyroux and Saint-Jean-de-Fos, was almost in ruins when Erik Gabrielson fell under the spell of his energy and realized the potential he held, to create his own estate and a small corner of paradise: he immediately started converting to biodynamic viticulture. The decision to wait three years and make his first vintage in 2009 was essential to ensure that the soil and grapes were healthy and cleaned of chemicals. The ecosystem began to regenerate, insects and small animals returned to the vines.


The history of the Mas dates back to the 13th century and it is told in the village that Philipe le Bel. The previous owner sold his grapes to the cooperative cellar and did not produce in his own name. We officially founded our estate when we bought the house and vines. This estate is the story of making a new wine in 50 year old vines. Labelled Vin de France and not A.O.C., allows to be free as for the blends and to be able to produce single grape variety cuvées. I grew up in Sweden, but I developed a love for the different French wine-growing regions when I was a young student. It is also during the frequent summer stays in Mèze in our holiday home that I developed a love for Languedoc and its inspiring landscapes.


Our approach is very simple: it consists in maintaining as much as possible the integrity and identity of each grape variety to allow them to express themselves individually, hence the importance of being labelled Vin de France. Our approach is obviously different because of my lack of a winemaking past. I have to create my own history and not perpetuate someone else's. Being a winemaker means creating something concrete, fresh and exciting from the treasures that Nature offers us, it's a holistic experience for me. My passion dates back to my university studies, when I used my university scholarship to buy Bordeaux en primeur wines! Then in 2003, I read an article about Bernard Bellahsen, a winemaker who worked his vines with horses and produced natural wine for over 20 years. My curiosity was piqued and I then visited his estate and tasted wine with him. I tasted his wine and was amazed by the energy and complexity it radiated, it was a revelation for me in the way I appreciated wine. It made me understand that being a winemaker means respecting nature, the soil and the grapes, in order to transform what it gives us in the most honest and natural way possible.