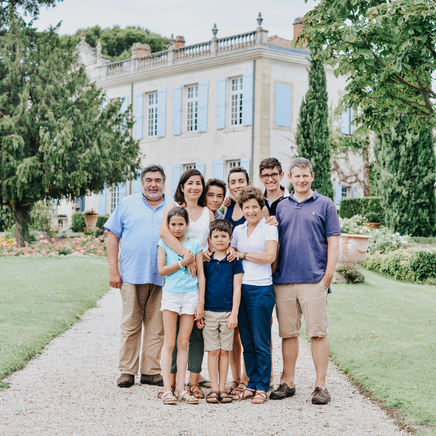 The terraced plots of Domaine Farge look like stairs for giants!

Near the city of Orange under the sun of Provence, all the conditions are gathered to produce simply delicious wines!

Near the city of Orange under the sun of Provence, all the conditions are gathered to produce simply delicious wines! It was in the early 70's that Michel and Dominique took the reins of the domain. They were joined in 2004 by their daughter Amandine. The estate covers 70 hectares under the appellations Châteauneuf du Pape, Côtes du Rhône Villages and Côtes du Rhône.

Located near the city of Orange, the vineyard of Château Beauchêne has all the conditions to produce delicious wines. Despite the construction of the castle in the 15th century, the vineyard only really developed and became known in the last century with the arrival of the Vergniaud-Bernard family, descendants of a long family of winegrowers in the region. Today, the estate is run by Michel and Dominique Bernard and is doing wonderfully well. Anchored in their terroir, the generations of Bernard family winemakers have always known that it was necessary to take care of the vines so that they would have a long life, the old vines being the guarantee of an optimal quality. Some of the family's plots date back to 1901, just after the phylloxera crisis. Letting a vineyard express itself without forcing it, in a fair balance between the characteristics of the terroir and the capacities of the grape variety, is the only way to preserve the true richness of a vineyard through the generations. The Bernard family has been working intensively for several years on agronomic methods that take into account the environment and health: preservation of the ecosystem and its biodiversity (grassing, fauna/flora refuge zones), installation of beehives that serve as ecological indicators and honey harvesting, controlled protection of the vineyard, absence of irrigation and control of soil fertility. The HVE certification is the extension of this work. It allows for the recognition and valorization of these good environmental practices.


The history of Château Beauchêne begins in the 15th century, with the arrival in France of another family: the De Biliotti family. It is one of the many Italian families who followed the Pope in his exile in Avignon and who subsequently prospered in France. The De Biliotti family coat of arms, which has overlooked the château for centuries, has become, over the years, the château's emblem and is now engraved on all our bottles. Michel Bernard comes from a family of winegrowers who have been present in the Orange area since the 17th century. Farmers until the end of the 18th century, his ancestors became winegrowers during the revolution, in 1794. With his wife, Dominique, they took over the family estate in 1971 and have been improving and developing it ever since.