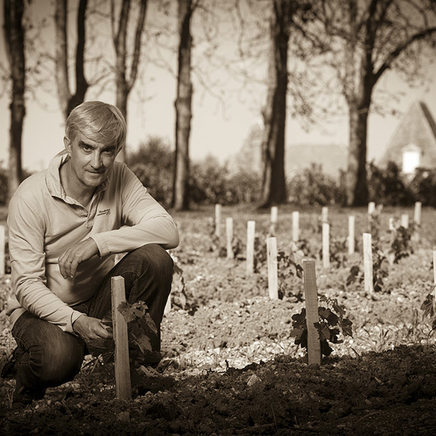 Fruit first! Ideally located between Bordeaux and St Emilion, this 30 hectare estate has undergone a restructuring of the vineyard since 2014 with its conversion to Organic Farming.

The estate is one of the oldest in Gironde, the 16th century Château being built on the foundations of a 13th century fortified castle. The vineyard, magnificently exposed, slopes down to the hillsides and was already exploited by the Jesuits in the 17th century. Located on the watershed, no less than five different terroirs coexist here. After new plantations, there are now six varieties in black and white. In addition, as the border between the communes of Ste Eulalie and St Loubes passes through the middle of the property, two appellations are present: Bordeaux Supérieur and Côtes de Bordeaux.

It was a crush that led us to this adventure, the historical and natural heritage present on the property giving it a special atmosphere. The estate is composed of meadows, shrubs, hedges, century-old trees allowing a natural protection of the vine by hosting a small fauna that helps to regulate the parasites of the vineyard. It is nature itself in its diversity that best protects the vine. Thousands of shrubs and fruit trees have been planted to recreate forest corridors suitable for birds and insects.

Sharing our experiences by opening the Château is essential to us. This is why welcoming, visits to the vines, cellars, Biodynamic awareness but also accommodation on the property are an important part of our activity. By multiplying experiences and encounters we make fantastic discoveries...