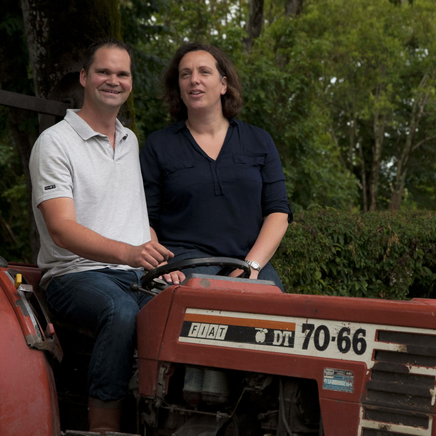 The 60 ha property, including 28 ha of vines in one piece, enjoys an ideal location in Gascony, since it is located both in the geographical areas of the AOP Buzet, IGP Côtes de G...

The 60 ha property, including 28 ha of vines in one piece, enjoys an ideal location in Gascony, since it is located in the geographical areas of the AOP Buzet, IGP Côtes de Gascogne, Floc de Gascogne and Armagnac ! Today the largest estate among the independent winegrowers of Buzet, Frandat is recognized as one of the pillars of the appellation.

Laetitia grew up on the estate and spent her first professional years in a multinational food company in the Paris region.... Mickaël, on the other hand, left his native Brittany to work in real estate in Paris. In 2004, they met and decided a few years later to take over from Laetitia's parents. In 2008, after a few months of transmission, Laetitia and Mickaël remained alone on the estate. They then learn the trade "on the job" and bring their personality to the production of Frandat wines.

Even though my wife Laetitia grew up on the estate, she always wanted to discover new horizons without imagining one day taking over from her parents. On my side, before I met her, I didn't have any particular attraction for wine. It is therefore together and with a neophyte's eye that we took over the property in 2008. This forces us to remain humble and modest in our profession.... Backed by Marc Quertinier, a discreet but renowned oenologist, we are now passionate about our profession and are proud to produce wines that reflect the sun of Gascony, but also our personalities!

Our setting on this beautiful estate, isolated in the middle of our vineyards and plum orchards (we are also producers of Agen prunes...), confirms our choice of life with our young children, even if the profession of winemaker is an important personal investment every day.