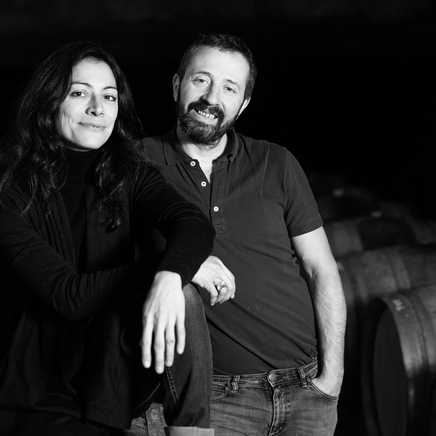 Emeline and Sébastien's approach is guided by the conviction that wine must give emotion and tell its story. "A wine must remain alive!" It starts with cultivated vines that are cultivated....


The Bobinet estate is located in Saumur, between the hillside and the banks of the Loire, in the Saumur Champigny appellation. The soils are mainly calcareous, with clay surface layers and silts of varying depth. The harvest is obviously done by hand, to harvest only the grapes that are healthy and perfectly ripe. The harvest is then vinified as naturally as possible, and the wine is aged mainly in barrels in the cave cave.


I returned to the family land in the early 2000s, just in time to save the last parcels of Cabernet Franc planted by my grandfather after the Second World War. The beginning was difficult with the old one who had difficulty accepting his grandson's organic farming vision, but trust finally settled in, and I was able to work as I intended, and apply the advice of my early mentor, Olivier Cousin.

Then the estate expanded, without the practice in the vineyards or in the cellar changing its objective: to make good food while respecting the environment and people. Emeline came into my life and the activity took a new turn, opening up to the whole world with exports, while developing local contact with a reception, tasting and entertainment area on the banks of the Loire.
Today, Emeline is mainly responsible for the vinification, and I manage the entire viticulture part.

No guru in our house! We each come from very different worlds, and we became winegrowers in our thirties. Perhaps this is what makes us who we are, this assemblage of personal stories that brings forth a joyful diversity and open-mindedness. We find ourselves on many things such as: conviviality, a taste for renewal, gastronomic pleasures, encounters and friendship.

We are not certified in organic agriculture, but we certify on the honour that we follow its principles. It's an ethic rooted in us!