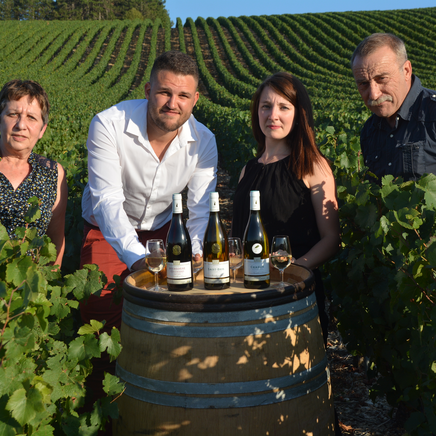 Driven by the same love of terroir and wine, it seemed obvious for Anaëlle and René, aged 30, to take over the reins of the family estate in 2020.

The Domaine GRIVOT-GOISOT, owner and harvester, is located in Burgundy in the heart of the Auxerrois vineyard, in a village called SAINT-BRIS-LE-VINEUX, the exception in Burgundy with its Sauvignon. The Domaine covers an area of 26 Hectares and exploits prestigious appellations such as Chablis, Chablis Premier Cru as well as Saint Bris, Bourgogne Côte d'Auxerre, and Bourgogne Aligoté.Anxious to respect the rules of quality, it gives way to new technologies of wine making which bring a real plus to the exploitation and it is in a step of preservation of the environment, that the Domain exerts a Sustainable Viticulture which it does not cease developing over time.

The old memories of Saint Bris testify that the GOISOT Family already owned vineyards in the 15th century, but it was in 1947 that Serge GOISOT gave another dimension to the exploitation by launching into the production of bottles.Since then, the estate has been the result of several generations of winegrowers who remain faithful to the family traditions and the passion that drives them. Serge GOISOT gave way in 1991 to Anne and Arnaud GOISOT who in turn passed on the estate and their knowledge to Anaëlle GOISOT and René GRIVOT in 2020.

René GRIVOT, a native of Côte d'Or, likes to tell that his father-in-law, Arnaud GOISOT, introduced him to the Saint Bris appellation, which was a real revelation for him.