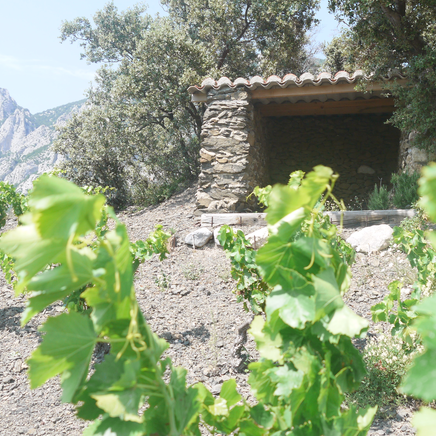 A CULTURAL AND GENERATIONAL ASSEMBLY - Located on a mound of deep black schist at 350 metres above sea level, Le Secret des Marchands is produced only from a plot of land of....

A CULTURAL AND GENERATIONAL ASSEMBLY - Located on a mound of deep black schist at 350 metres above sea level, Le Secret des Marchands is produced solely from a parcel of black Grenache, the king grape variety in the region. These vines "have no age": they were already planted when the vineyard register was created in the area, they are more than 90 years old. Cut into cups, they produce little. The yield is on average around 10 hl/ha, which is 2.5 times less than the yield of the MAURY appellation. Here two to three vines are needed to produce one bottle.

The history of the Manoir des Schistes is quite recent. This estate made up of vines that were part of larger farms whose grapes were intended for the cooperative. The successive transfers of farms have seen the fragmentation of these large areas into small units. Gradually, the quality of these vines came out of the cooperative anonymity and they were noticed by a first adventurer in 2008, who then sold the estate to the current owner. Mr. Sanchez comes from a family of farmers in the Lot who produced grapes for the Cahors wine. The family has grown, combining French and Argentine culture around wine and the Maury has always been part of their cultural and culinary landscape. After a professional career partly dedicated to oenology and agriculture, this family has found itself around this estate, where the plots are planted only with Grenache, the king grape variety of Roussillon. It is the one that best adapts to this arid soil, made of schistose soils that do not retain much water. It can withstand this hard wind, which often comes from the north, by following a corridor between the Pyrenees and the Corbières and continue to give quality grapes despite the hardness of summer. our wish is to identify and buy plots with the highest possible qualitative potential to produce wine in the least interventionist way possible.

During the difficult times of the Middle Ages, when there was little security, merchants were the target of attacks by looters on the main road. To descend the Agly valley they used mountainside paths, steeper than the main road, but less dangerous for their goods and for them. To find it on these paths, our plot, overlooking the path, served as a reference point for them. She was their secret.